DHX Media and Sony Pictures Home Entertainment ink a global home entertainment distribution deal for all new and classic episodes of ‘Teletubbies’ in both physical and digital formats. 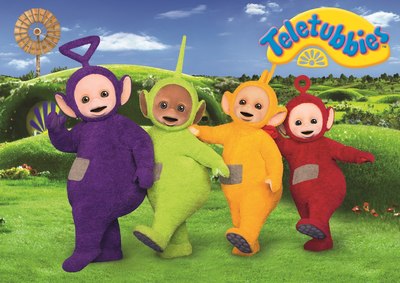 CULVER CITY, CA & HALIFAX, NS -- Sony Pictures Home Entertainment and DHX Brands, the brand-management and consumer-products arm of DHX Media, has announced a global home entertainment distribution deal for all new and classic episodes of Teletubbies in both physical and digital formats.

The new Teletubbies series follows the familiar, well-loved characters and styling of the original series, but has been visually enhanced, bringing a refreshed and contemporary look and feel to one of the world’s best-loved pre-school properties. The show features brand new elements including Touch Screen tummy TVs and a hi-tech Tubby Phone, bringing the Teletubbies into the 21st century alongside viewers. The new Teletubbies premiered on Nick Jr. in the US on May 30, 2016; on DHX’s Family Jr. in Canada in January 2016; and on CBeebies in the UK in November 2015, where it has consistently rated as one of the channel’s top shows.

“Teletubbies is one of the most popular and iconic brands for young children and families around the world,” said Ben Means, SVP, Third Party Strategic Partnerships, SPHE. “We are very pleased to be working with DHX Media to help introduce Teletubbies to new generations of fans everywhere.”

“The global appetite for Teletubbies content has proven to be unwavering, with strong demand for both the new series and the classic show,” added Tom Roe, Commercial Director, DHX Brands. “Given their reach and standing, Sony Pictures Home Entertainment is the ideal international home entertainment partner for this brand. We look forward to Sony providing more ways for pre-schoolers and their families to engage with the magical world of the Teletubbies.”

Teletubbies first launched in March 1997 and became one of the most successful global children’s brands of all time. It has reached over 1 billion children to date and the original episodes have aired in over 120 territories in 45 different languages. It was the very first western pre-school property to air on China’s CCTV reaching an audience of 300 million children.