Following successful premiere on Nicktoons in the U.S., original picked up by Nickelodeon International for more than 140 territories. 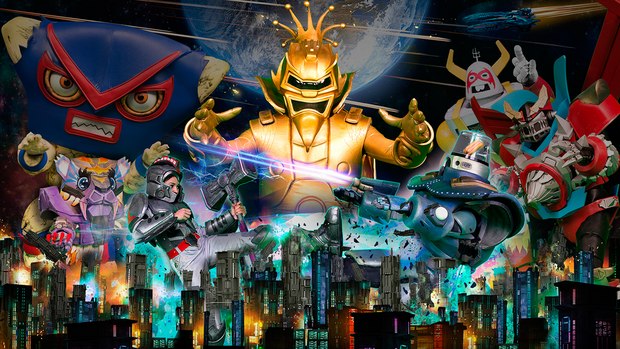 Following the show’s successful premiere on Nicktoons in the U.S., Nickelodeon International has picked it up for air across more than 140 territories. Produced by DHX Media, Massive Monster Mayhem is co-created by Artur Spigel (founder of 7ate9 Entertainment) and Michael Chaves.

Massive Monster Mayhem is an original show for kids 6–11 that combines live action and CGI animation with competition and comedy. Each episode features three real-life kid heroes competing in a gauntlet of Intergalactic Battle Alliance challenges to become Earth’s champion and face off against Master Mayhem’s league of monsters in the ultimate “Monster Mashdown.” The unique series combines cutting-edge, real-time CGI and pre-visualization technology.

“With its high-tech hilarity and competitive craziness, Massive Monster Mayhem is an audacious and action-packed show that kids just love,” said Josh Scherba, EVP, Distribution and Content. “Following a strong start with solid ratings in the U.S. on Nicktoons, we’re delighted to extend the series to Nickelodeon’s international audience. We see exciting potential with this brand to reach beyond TV into games, toys and other consumer products, and we look forward to spreading more Massive Monster Mayhem to kids worldwide.”

Massive Monster Mayhem originally launched on Nicktoons in the U.S. in October, garnering solid ratings among the network’s audience. As part of the new agreement, the mayhem will begin rolling out on Nickelodeon’s international channels beginning this year, with season one scheduled to premiere on the broadcaster’s Nordics, Australian and MENA channels in January. The series will roll out across remaining territories throughout the year.

Global distribution for Massive Monster Mayhem is handled by DHX Media, while licensing is managed by the company’s brand management and consumer products arm, DHX Brands. With its stunning visuals, which combine cutting-edge, real-time CGI and pre-visualization technology, and its host of exciting characters -- like Master Mayhem, the self-proclaimed “Greatest Ruler in the Universe” -- Massive Monster Mayhem offers significant appeal for young audiences and great potential for consumer products.

Produced by DHX Media, Massive Monster Mayhem is a brand-new concept in kids’ entertainment. Massive Monster Mayhem features live gameplay by kids in futuristic challenges against gigantic Monster Superstars for the chance to win prizes and save the planet from destruction. The series is executive produced by 7ate9’s Art Spigel, together with DHX Media’s Steven DeNure, Anne Loi, Ken Faier and Josh Scherba.