Abstract: New mobile game based on the hit TV series ‘Slugterra’ coming to the App Store May 2015. 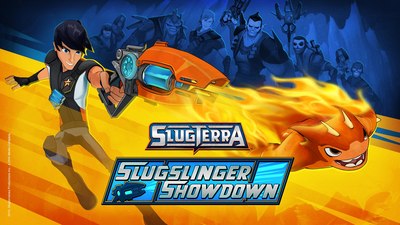 DHX Media, a key player internationally in the creation of content for families and children, is set to launch a second Slugterra mobile game. The fast-paced action game Slugterra: Slugslinger Showdown will be available in the App Store for iPhone, iPad and iPod touch on May 7, 2015. This release follows the success of the first mobile game Slugterra: Slug it Out!, which launched in December 2012 and has hit #1 spots for free action or puzzle game for iPad in 23 territories to date.

Slugterra: Slugslinger Showdown will be available in the App Store in more than 130 countries in English, Arabic, French, Italian, Korean, Portuguese, Spanish and Turkish-language versions.

Slugslinger Showdown sees players ducking, dodging and blasting slugs to defeat Dr. Blakk’s minions and save Slugterra! The key to victory is upgrading your blaster with high-powered mods and choosing the best slugs for each round.

Users play as Eli Shane, the protector of Slugterra, and battle hordes of villains to save the 99 caverns. New caverns can be unlocked through Story Mode, and players can collect a wide range of new gear to customize their blasters. “If there’s one thing Slugterra fans always want, it’s more games,” said Ken Faier, Senior VP & General Manager, DHX Content, Kids & Family. “The same team that developed and created Slug it Out! is thrilled to release this brand new mobile game that gives kids yet another avenue to become immersed in the world of Slugterra and have their own slugslinging adventures.”

The first Slugterra mobile game, Slugterra: Slug it Out, has millions of downloads and continues to grow, following a much-anticipated 2.0 update on April 2, 2015, which added ghouled slugs to the game and led to its highest ever levels of engagement.