New deals for series created by Brad Peyton are signed across Europe, Latin America, Australia and the Middle East. 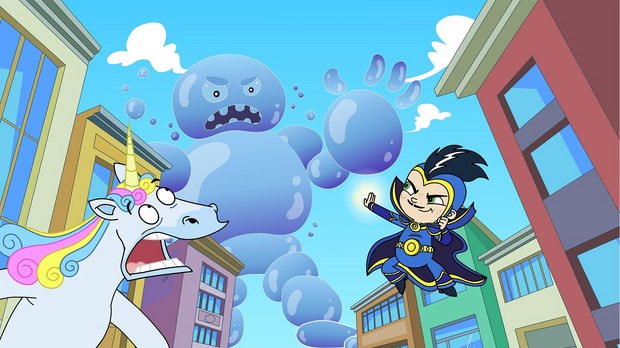 Family entertainment producer and distributor DHX Media has signed a number of deals across Europe, Latin America, Australia and the Middle East for its new proprietary series Dr. Dimensionpants.

In a multi-territorial agreement, Turner Broadcasting has acquired rights to air season one on its channels in Latin America and across Europe in France, Germany, Denmark, Norway, Central and Eastern Europe, Russia, Spain, Italy, Poland and Portugal. In separate deals, France Télévisions has acquired free TV rights to the show in France, while further deals have been signed with ABC Australia, MBC in the Middle East and Noga in Israel.

Commissioned by Corus Entertainment’s TELETOON in Canada, the series is aimed at kids 6-11 years and is created by Brad Peyton, best known for directing Cats & Dogs 2: Revenge of Kitty Galore and Journey 2: The Mysterious Island.

“We have assembled a stellar line-up of channels for this series internationally, along with a strong broadcaster domestically in TELETOON,” said Josh Scherba, SVP Distribution at DHX Media. “Brad has created a riotous comedy perfectly fitting for this demographic and with demonstrable international appeal.”

Dr. Dimensionpants follows Kyle Lipton, who, for all his life was just like the other kids -- playful, happy and without a care in the world until one day an inter-dimensional portal opened up and dropped onto his lap a pair of glowing pants. Now Kyle is Dr. Dimensionpants, a super-hero with a super intense attitude who must deal with the constant threat of inter-dimensional villains bent on destroying the universe! Okay, not the universe but his hometown of Ganderville, which is like the universe to a 12-year-old boy.

On top of all that, Kyle still has to deal with day-to-day issues like homework, chores, and his annoyingly smart seven-year-old sister. But the worst part is that nobody believes that Kyle is Dr. Dimensionpants. He goes to great lengths to let everyone know his alter-ego, but since he can only wear the cosmic pants in an emergency, no one recognizes him.