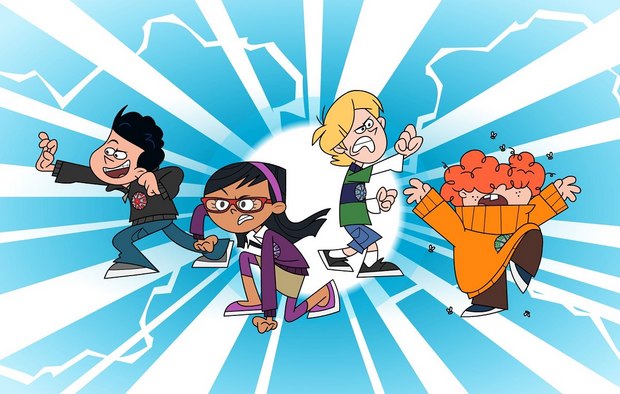 Aimed at the 6-11 demographic, the comedy is being produced out of DHX Media’s Vancouver studio. Supernoobs is created by Scott Fellows, who is also behind DHX Media’s hit animated series Johnny Test, created for the same target audience.

DHX Media has television, licensing and merchandising rights globally, with the exception of initial Canadian and U.S. broadcast rights which are held by Teletoon and Cartoon Network U.S., respectively.

The Super-Tastic-Supernoobs is where the evils of the universe and the evils of adolescence collide. It’s where four 12-year-old nerdy and best-friendies -- Kevin, Tyler, Shope, and the Roach -- no longer have to just survive the harrowing hallways of middle school, but have to survive microcosmic assassins infecting earthlings bent on destroying them and the Earth! Sometimes it’s hard to decide which mission is harder!

“We are very happy to be collaborating on a new Scott Fellows project on our animated slate, following the success of Johnny Test,” said Steven DeNure, President and COO of DHX Media. “The commitment of TELETOON and Cartoon Network US is testament to his creative talent. Supernoobs is no doubt another significant addition to our line-up.”

“After the success of Johnny Test in Canada and internationally, I’m thrilled to have Supernoobs in production,” Fellows added. “DHX Media has assembled an all-star staff of truly funny and creative people, all with the same like-minded goal: to make kids laugh -- a lot!”