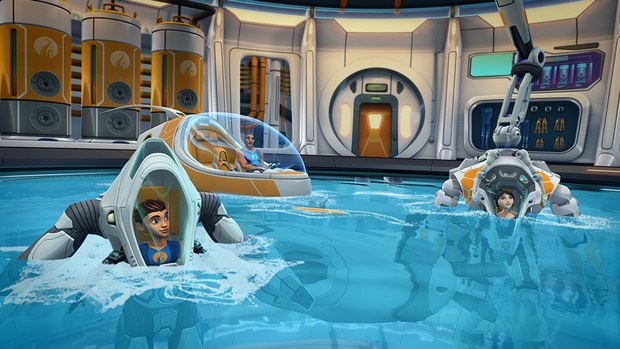 PARIS, France & HOLLYWOOD, CA -- Technicolor has named Canada-based DHX Media the global distributor for the animated adventure The Deep, a co-production between DHX Media and Australia-based A Stark Production.

DHX Media will represent the CG-animated series worldwide excluding Australia and New Zealand, which is handled by A Stark Production. International broadcast partners for The Deep currently include The Seven Network and ABC3 in Australia, Super RTL in Germany, Ketnet in Belgium, NRK in Norway, SVT in Sweden and YLE in Finland. The series is scheduled to premiere in Australia on Seven Network on November 30, 2015.

The Deep, currently is in production on 26 half-hour episodes. The series targets kids 6 to 12 years old and their families. The series is based on the international hit graphic novel series created by best-selling comic book author and playwright Tom Taylor (Earth 2, Superior Iron Man, Batman: Legends of the Dark Knight, Injustice: Gods Among Us, Star Wars: Blood Ties), illustrated by James Brouwer (Justice League Beyond), and published by Gestalt Comics.

“As a co-development and co-production partner, DHX Media has played an integral role in creating this visually stunning and unique series, and as such, they are the ideal partner to represent the continued global rollout of The Deep,” comments Alison Warner, VP, IP Sales, Acquisitions and Co-Productions, Technicolor Creative Development

“This is a standout and visually distinctive series that is ideal for the 6-12 demographic to co-view with their families,” added Josh Scherba, SVP Distribution at DHX Media, “It’s fantastic to have been involved from the start, working with the talented people at Technicolor, and now to be showcasing the finished show to global broadcasters. A raft of major channels are already committed to airing The Deep, and we anticipate many more coming on board.”

The Deep follows the adventures of the Nekton family, a brilliant team of underwater explorers. With state-of-the-art technology and an unquenchable thirst for discovery, the Nektons explore the mysterious depths of the ocean, where most of our world lies unexplored and unexplained. While others look up to the stars, this family knows that an infinite number of things shine brightly in the darkness below. The deep is a place where leviathans swim through sunken cities, where pirates lurk amidst floating black markets, and where a mysterious group of Guardians hide long lost secrets.