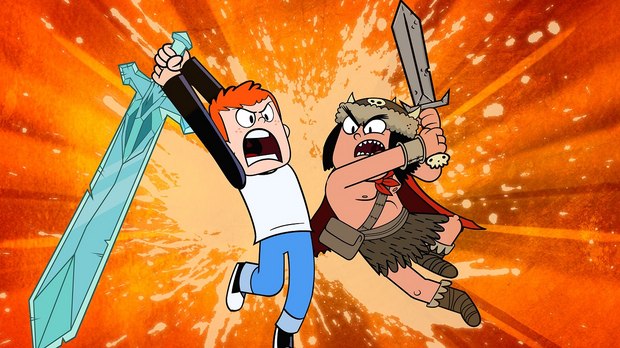 Linear broadcasters newly signed included, ABC ME for Australia, CITV in the UK, Gulli & Canal J for France, Discovery in Italy, MBC3 for the Middle East, Ultra in the former Yugoslavia, Zoom in Israel, and Canal Panda for Portugal. In addition, a subscription video-on-demand (SVOD) deal with Netflix has been signed for second window streaming rights worldwide.

These licenses add to previously announced deals for the series with Disney XD channels in the U.S., Latin America, South East Asia and Taiwan.

Fangbone! is an original DHX Television commission, which airs on Family CHRGD, and is distributed worldwide by DHX Media.

“We are always on the lookout for innovative, distinctive kids’ content with global appeal for our distribution slate,” said Josh Scherba, EVP Distribution and Content of DHX Media. “Fangbone! is a series that really catches the eye, which is clear from the scope of our streaming and broadcast deals. As well as consistently winning audiences on our own Family CHRGD channel, we expect the show to gain a strong following globally through the terrific outlets announced today.”

Fangbone, a young barbarian from Skullbania, travels through a magical portal into the suburbs of our world with a most dangerous burden: To protect the blackened and slightly jam-smelling big toe of venomous Drool from being reunited with its master - the evilest sorcerer in all the planes of existence! Fangbone becomes best friends with Bill - a kid whose weirdness is his ultimate weapon - and who helps Fangbone survive in a world of spelling tests and waffles!

Together, Fangbone and Bill battle Drool’s monsterish creations and minions, along with fat fingered foot finders, independent magical contractors, and even the thieving Shadowsteppers - keeping the toe safe from any who would use its evil powers. It’s a tale of epic comedy, epic action and epic epicness.