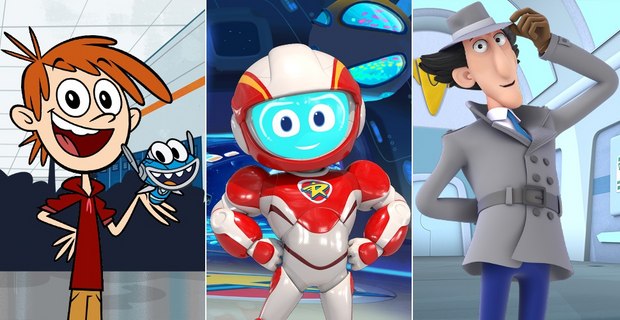 Josh Scherba, SVP Distribution at DHX Media, commented, “We have a very strong slate for MIPTV with these new commissions underscoring our reputation for producing standout original content for kids and families. Driven by notable creative talents, with Rob Boutilier directing Chuck’s Choice, and Jeff Rosen behind Space Ranger Roger, our newest two shows have fantastic pedigrees. Along with the iconic Inspector Gadget, now going into a second season after significant global demand, we are looking forward to debuting these shows to the international market at MIPTV.”

Taking place April 4-7, 2016, in Cannes, France, MIPTV gathers the world’s most successful distributors, buyers and producers to strike distribution and co-production deals. Visit the DHX Media team at stand R7.A11, in the Riviera hall of the Palais des Festivals.

For Chuck McFarlane, life is all about making choices. But lucky for him, these aren’t just regular everyday choices! Through an intergalactic gift from the stars, Chuck is bestowed with what may be the greatest device in the universe, the U-Decide 3000, giving him the power to literally choose his next adventure! Some choices turn out great, others, not so much. After all, being given the power of flight sounds amazing. But what if it came with a larva sac attached to your abdomen? Suddenly everyone's looking at you like you're a bit strange. Of course Chuck’s life choices are a bit more mind-blowingly awesome, since he is the decider! While most kids have very limited choices, this 10-year-old gets to control his destiny and go on one thrilling adventure after another without any boring ol' adults telling him what to do, and with his best friends coming along for the ride.

Space Ranger Roger is a plucky little alien hero sent to help a strange, faraway world, Earth! No assignment is too big or too small. Roger’s motto is, “A friend in need is a mission for me!” Along with his trusty squad of Ranger bots, and his bot dog, Rover, Roger can always get the job done. Each day, Roger scans the surface of our small blue planet from orbit aboard the Friend Ship. When he picks up a distress signal from an Earth creature, it's his job as a Space Ranger to gear up with his team of rambunctious fix-it bots, find out what the problem is and save the day in a fun and creative way.

The new Inspector Gadget is back again! The stakes are higher than ever in season two for Inspector Gadget, his niece Penny and their trusty dog, Brain. Will they be able to defeat Dr. Claw and his nephew Talon? Or will the MAD villains finally be victorious? Both sides are more determined than ever to come out on top, even if Inspector Gadget still hasn’t got a clue.