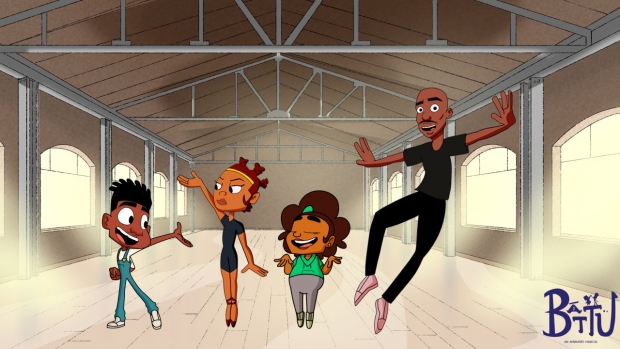 From the French ballet term meaning “beat,” Battu follows teenagers Otis and Jada, two gifted dancers in Chicago whose free-spirit and individuality often leave them as outsiders in the rigid world of mainstream dance. Together they find a home at a struggling hiplet (a style of dance combining hip-hop and ballet) studio and a family among the studio’s troupe of dancers and instructors.

The series’ soundtrack will feature original music and punctuate the stories of the characters, which explore themes such as courage, self-empowerment, inclusiveness, perseverance, and the power of friendship. The project is based on Bottoms’ animated short film Battu: An Animated Musical that is currently in production. “Battu is unlike anything we have ever tried at the studio,” commented Warner Bros. Animation and Cartoon Network Studios president Sam Register. “This ambitious project brings together and celebrates two of our greatest storytelling mediums—animation and music. Matthew and Chaz are our perfect dance partners as we strive to tell authentic stories that both empower and entertain.”

"Chaz is one of the most exciting young voices in animation and we are thrilled to be working with Sam Register, Nicole Rivera and the rest of the Cartoon Network Studios team to develop Battu," added Cherry.

“I grew up on a healthy diet of Cartoon Network shows and to be working with them on Battu is a dream come true!” shared Bottom. “This project is my love letter to the city of Chicago, animation, and musicals.”

Last July, HBO greenlit Cherry’s new 2D animated series, Young Love, based on his Oscar-winning short. In addition, this past October, Cherry’s first feature film, TUT, based on an original idea by Cherry and Young, went into development at Sony Pictures Animation. Cherry will direct; he and Young will both executive produce.