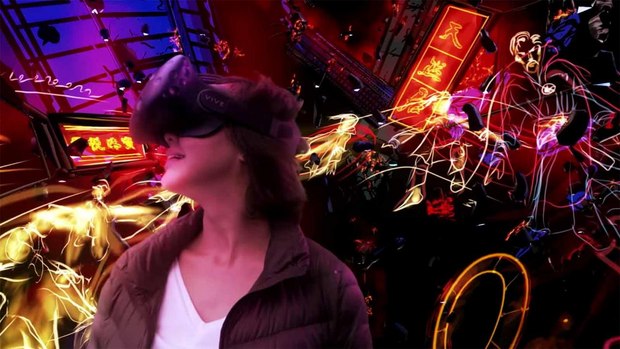 The dimensions of Marvel Studios’ Doctor Strange come to life courtesy of a globe-trotting 360 Google Tilt Brush experience from creative agency Denizen, which continues its successful relationship with Marvel Studios by producing the “Change Your Reality” campaign for its latest superhero blockbuster.

“We wanted to promote the jaw-dropping visuals of Doctor Strange in a way that reinforced the spectacular quality of the film,” says fellow Denizen co-founder Joe Matsushima. “We found that Tilt Brush in VR empowered each artist to create their own interpretation of each dimension by hand, versus a purely visual effects creation. Any person who puts on the VR headset can experience the immersive world of Strange themselves as seen through the eyes of these unique artists.”

The final “Change Your Reality” on-site experience was an outdoor “mixed reality” production, shot over two months in video and VR from sidewalks to rooftops across each of the cities. Passersby were invited to strap on a headset and explore the world of Doctor Strange for themselves. Beginning in a VR Sanctum Sanctorum, participants were given the freedom to travel between the different dimensions in their designated locales around the world.

“We wanted everyday people to try it themselves and then film their authentic reactions as they walk through the virtual world,” adds Matsushima. “We wanted to convey the vast scope and awe-inspiring beauty of the dimensions within Doctor Strange while connecting to the theme that these dimensions are within our own reality.”

Despite facing the challenge of filming mixed reality in an unpredictable, live setting, Denizen was able to push the technical limitations of its hardware and software and ultimately pull off an experience that was elaborate yet inviting to wide-eyed onlookers. “Mixed reality has been filmed in the past, but our team was challenged to solve many of the problems that occur when using VR, which include issues like: virtual tracking, stabilization, and isolating objects from the foreground and background,” Matsushima illustrates. “We spent a lot of time with our production team problem solving how to create a highly technical live event while giving our team the ability to film the process with multiple cameras including a synced virtual camera. It’s a careful balancing act of creating an enjoyable live event and professional video shoot, but we feel like we accomplished both in all three cities.”

Doctor Strange is in theaters in RealD 3D November 4.