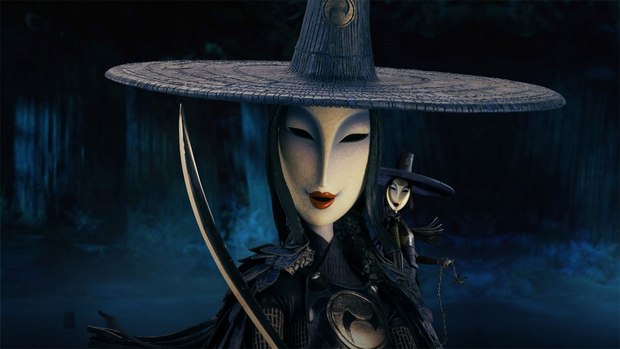 In an historic first, on Thursday morning costume designer Deborah Cook received a nomination for Kubo and the Two Strings in the category of Excellence in Fantasy Film by the Costume Designers Guild. This marks the first time in the 19 year history of awards that an animated film has been nominated by the CDG. Other nominees in the category are Colleen Atwood for both Fantastic Beasts and Where to Find Them and Miss Peregrine’s Home for Peculiar Children, and David Crossman and Glyn Dillion for Rogue One: A Star Wars Story. Awards will be handed out on February 21 at a ceremony at the Beverly Hilton Hotel. (The full list of nominees for the 19th CDG Awards can be viewed here.)

The pre-eminent costumer in the field of stop-motion animation, each of the last five features that Cook has worked on has been nominated for an Academy Award: Corpse Bride, Fantastic Mr. Fox, The Boxtrolls, ParaNorman and Coraline, for which she received a Visual Effects Society Award nomination.

“I’m so thrilled to be considered for the CDG award,” Cook says of the nomination. “I truly appreciate that this is a first for our animation industry and couldn’t be happier or prouder or more excited to be in such fine company indeed. The CDG recognizing Kubo and the Two Strings means so much to me it’s beyond words. I whole heartedly thank the Costume Designers Guild for this incredibly special honor. Creating costumes for animation is a unique and wondrous world of small scale miracles of textiles and engineering. Each and every costume is designed from the ground up and has a very specific set of challenges. As with all stories, costume is an opportunity to give credence, value and depth to our heroes and villains, families and mystical beings. It gives resonance to our characters. To be included in this category is a dream.”

For Kubo and the Two Strings, her unit researched the imperial history of Japan, most particularly the Edo period. Of enormous interest to Cook’s team was the “folding of fabric” that is emblematic of traditional Japanese clothing including the kimono. Old damask and old silk were observed for their folds, and for their shifts as the garments age. Shoes were surveyed because of how their impact on people’s gait and how they comport themselves. The traditional Japanese textiles Ikat weave, boro, sashiko stitching, and katazome inspired the department’s costume fabrics.

“When we start a new film, we’re starting over, starting from scratch,” Cook comments. “So my research cannot be just about costumes. For this movie, it was crucial to study Japanese architecture, the politics of clothing, and Japanese culture as a whole. This will all inform the way we think about the costumes before we even start the design process. We worked with our art department to create all our own fabrics, designs, and embossments. Every piece of clothing is made by our department by hand.” The costumes in Kubo and the Two Strings are also closely linked to the internal state of a character. When Kubo’s mother is in an almost trance-like state, the heaviness of her kimono and the many layers underneath require her to move very slowly, mirroring the strain she is under. “Mother’s costume was a huge learning curve for us,” says Cook. “We played around with different engineering to see how we could make certain fabrics move in a certain way. We did origami interpretations of how a kimono might sit on a figure that is only 11 inches tall. Then we looked at Issey Miyake’s folding garments; he has dresses that just fold flat on the floor, but when you lift them up they cascade over the body in the most exquisite way and they drape upwards around a figure. Yet they have this weight at the bottom, so the gravity is there and the folds evolve. So the folding was key to almost everything we did.”

Ornate gowns of the Edo period were studied to see exactly how and where the kimonos drooped with weight. This was in part because “our kimono sleeves had their own armatures,” explains Cook. “These metal forms attached to the puppet’s main armature through wire pieces called ‘snakes.’ It may look free and flowing, but nothing moves on a puppet without armature to support that movement. On most garments in our movies, the sleeve moves at the same time as the puppet’s arm, but with a kimono the garment had to move after the arm moves -- and we have to engineer it that way.

“We used a lot of Tyvek [the high-density polyethylene fiber material so often used in building construction] underneath fabrics as well, because it has the dimpled surface of an older, richer fabric and resembles crumpled silk,” Cook continues. “We also used actual silks that were very fine grade so that the surface weave of the fabric looked good in our scale; these too had to be weighted and bulk out underneath.”

You can watch Cook discuss her creative process in an exploration of where ideas come from in the video below: