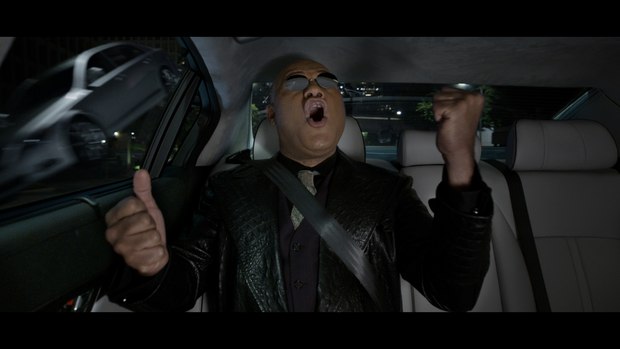 In this popular Super Bowl spot, Laurence Fishburne reprises his role as Morpheus to unveil the truth about society’s notions of luxury – and the Kia K900. To create a Matrix-worthy CG environment of flying cars, warping buildings and bendy spoons, David&Goliath tapped Digital Domain to work with Directors Carl Erik Rinsch and Colin Jeffery.

While Digital Domain’s work is evident in the rippling cityscape and exploding streetlights, there are plenty of invisible effects as well. Artists created Morpheus’ all-CG glasses, added CG windows and glass to the live-action Kia K900 for all interior shots (which were shot on bluescreen) and reflection passes to the exterior, touched up buildings and added a number of subtle surprise visuals in the piece.

David&Goliath Executive Producer, Paul Albanese, said, “For the Kia Super Bowl project, we were faced with the challenge of making sure the VFX in our spot honored the quality of one of the most highly-regarded VFX films of all time. Digital Domain's experience in epic and groundbreaking movie effects runs deep, as evidenced in the Academy Awards they have won. DD really delivered for us. They put together a really strong team, led by acclaimed VFX Supervisor Eric Barba, and the resulting work they did is beautiful.  And as a bonus, they were truly collaborative and enjoyable to work with.”

“This was such a great concept and really strong creative,” said Barba. “Creating effects for movies is what we do, so we felt right at home on this project.”