The film will be adapted from a short story, written early in the prolific author’s career, that follows the child Adara, who befriends an ice dragon that helps her end a brutal war. 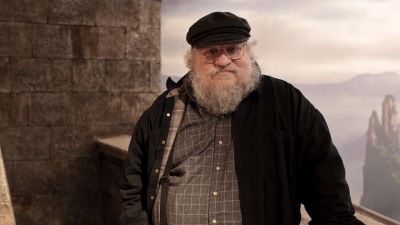 We’re finally getting some George R.R. Martin content that isn’t Game of Thrones! It’s still about dragons and winter, though.

The slow-writing author recently confirmed with Penguin Random House that The Ice Dragon, a children’s story penned early in his career, will be adapted into an animated feature by David Anthony Durham. "Warner Bros. Animation has purchased the rights to it, and we're going to expand it to a fully animated film […] to be released in a motion picture palace near you, and David Anthony Durham will be writing the screenplay. And he better do a good job!”

This seems to be a very transparently veiled dig at the Thrones HBO series writers David Benioff and D.B. Weiss, as Martin goes on to lament about adaptations not being faithful to source material. No pressure!

The Ice Dragon follows Adara, born during a harsh and long winter, who befriends an ice dragon; years later, when war comes to her farm, Adara and the dragon fly into action. While the story does not take place in Westeros, it certainly sounds like a precursor to Thrones lore.

Vince Gerardis will executive produce, with Martin producing. Warner Bros. Animation Group’s Allison Abbate and Chris Leahy will oversee the project, which is still in early development, so no word yet on what style of animation will be used, or if a release date has been scheduled.

But, we’re guessing 2D… since it’s Warner handling the animation.