Aardman alum to direct animated feature produced by Siege Train Studios and based on the well-loved children’s book by illustrator and production designer Barry Jackson. 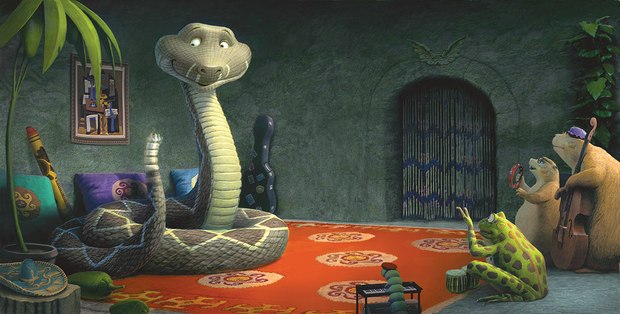 The film is based on the well-loved children’s novella of the same name, first published by Harper Collins and written by illustrator and award-wining production designer Barry Jackson (Horton Hears a Who!, How The Grinch Stole Christmas). Jackson has written the script and will be heading up production design on the project.

Danny Diamondback tells the story of a young rattlesnake with an oversized talent in his tail. When his parents are captured, Danny befriends Tito, a fun loving cockroach who soon discovers that Danny’s rattle is just the beat he has been missing. Together they form a band. As word of their remarkable new sound spreads, an outdoor concert is proposed. As the lights fade, Danny shreds his rattle. As his rolls and riffs drift far off into the darkness his parents hear them. Recognising his unique style, they immediately begin the perilous journey to be reunited with their son.

Represented by Academy Award-winning Passion Pictures, Walsh has directed commercials for the BBC, Pepparami and Duracell and won over 50 international awards, including Best Animation at Cannes for the Sony Bravia “Play Doh” spot and Best TV Special at Annecy. Walsh co-created and directed the Aleksander Orlov character for the long-running “Compare the Meerkat” campaign, winning three Golds and a Silver at the British Television Advertising Awards. Darren’s TV directing credits include Angry Kid, Shaun the Sheep and Morph for Aardman. Feature films to which Darren has lent his visual flair include Martin Scorsese’s Hugo and box office smash Paddington.

“Siege Train studios have put together an exceptional pool of talent and we are very excited to be working with them to bring Danny Diamondback to the market place,” commented Anthony Buckner, Director of International Sales at Kaleidoscope.

“Barry Jackson’s well-loved book is sure-fire combination of humour, heart and music and Darren Walsh is just an enormous filmmaking and animation talent,” Augspurger added. “I can’t wait to get started.”