10 new episodes of animated fantasy roleplaying series from ‘Rick and Morty’ co-creator will air on VRV in 2019. 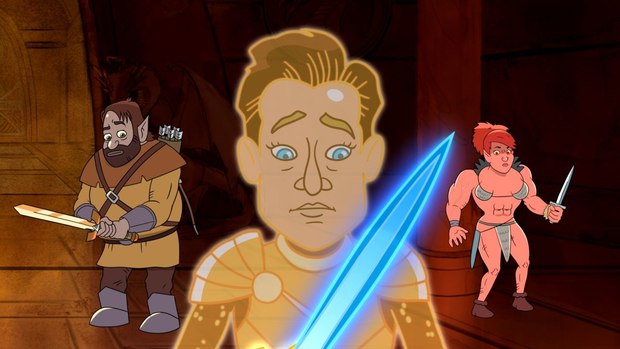 Dan Harmon’s live-action / animation fantasy roleplaying series, HarmonQuest, has been picked up for a third season. 10 new episodes will begin production in the next few months and are set to air exclusively on VRV, the fandom-focused video platform from Ellation, in 2019.  Harmon, co-creator of the hit animated series Rick and Morty, stars, along with executive producer Spencer Crittenden, Erin McGathy and Jeff B. Davis, who gather together to play the roleplaying game Pathfinder. The show debuted on the now shuttered Seeso streaming service in 2016 -- Otter Media's VRV picked up the rights, and after a successful Season 2, has gone into production on the new season.  While the producers are mum on details at this point, they’ve shared they’re working again with Starburns Industries and that a great lineup of guest starts is planned for Season 3. Previous guest stars have included Patton Oswalt, Aubrey Plaza and Kumail Nanjiani.

According to Sarah Victor, head of content development at VRV, Ellation, “We love unique animated series, and HarmonQuest is the perfect blend of comedy, animation and gaming. We kick off production in Los Angeles this fall and we're really looking forward to showing our community what we have in store for season three.”

“Thanks to VRV’s dedication to serving fandoms and growing communities, they’re the perfect home and partner for HarmonQuest and all adventurous and fantastical content online,” added Crittenden. “We’re proud to stand tall with Otter Media powerhouses like Crunchyroll and Rooster Teeth. I’m beyond excited to be able to talk about Season 3 and I think I speak for everyone involved when I say we can’t wait to show you what we’re working on.”

HarmonQuest is produced by Universal Cable Productions and Starburns Industries. The series is executive produced by Dan Harmon, Spencer Crittenden and James Fino.