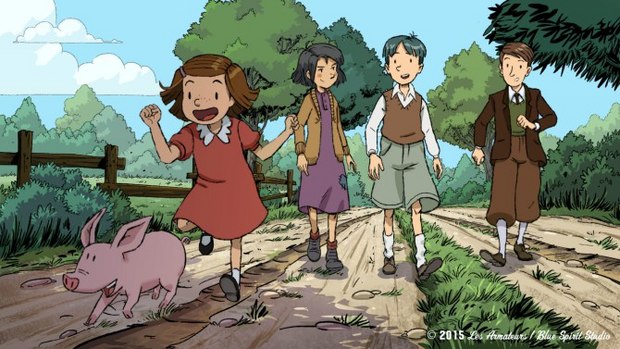 Paris-based Cyber Group Studios has signed a deal with Les Armateurs to represent international sales rights on one of the company’s flagship TV animation productions, The Long Long Holiday, according to a report by Variety. The news comes two days ahead of the Annecy’s International Animation Film Market (MIFA) at the world’s largest cartoon festival and conference.

Produced by Les Armateurs, the company behind The Triplets of Belleville, Michel Ocelot’s Kirikou franchise and Ernest & Celestine, and comprised of 10 half-hour episodes, The Long, Long Holiday will be broadcast over 10 days, in May 2015, to celebrate Europe’s end to World War II.

From an original idea by Delphine Maury and Olivier Vinuesa, The Long, Long Holiday turns on a brother and sister -- Ernest, who’s 11, and six-year-old Colette -- who are left by their parents at their grandparents’ house near the Normandy coast for a few weeks at the beginning of World War II. The father goes off to fight, the mother to a sanatorium to recover from illness. As World War II rumbles on, the children have wonderful adventures. But those few weeks become five years.

Graphic work, including character design, is being overseen by Emile Bravo, an associate of Joann Sfar and one of France’s most prestigious graphic novel artists.

A depiction of World War II -- including 1944 Normandy landings -- as seen through the eyes of the children, each Holiday segment will be accompanied by a one-minute interview with people who were children during the War. The modules will be animation sections made by recent graduates from La Poudriere animation school in Valence, near Lyon.

“This series is based upon the eyewitness accounts of people who were children aged seven to 20 at the time of WWII,”   said Ivan Rouveure, executive producer at Les Armateurs. “The series is meant to bridge the gap between great-grandparents and the children of today.”

“We admire very much the quality of Les Armateurs’ production. Broadcasters will value the importance of preserving the memory and informing younger generations of what the world went through not so long ago,” said Carole Brin, VP sales, acquisitions and new media, Cyber Group Studios.