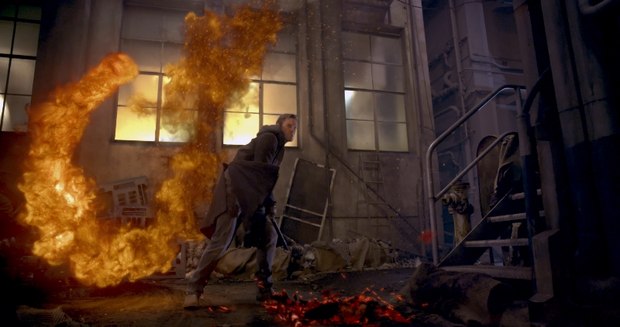 In his latest incarnation of the Frankenstein story, Stuart Beattie’s thriller follows the struggle of Dr. Frankenstein's creature 200 years after his creation.

Central to this story and the visual drama is the ‘demon descension’ effect developed by Cutting Edge. In the I, Frankenstein world, as a demon’s earthly body is mortally wounded, the demon’s spirit is violently released, triggering the destruction of the body. The spirit’s freedom is brief as it’s literally pulled downward to return to hell. The effect adds a dynamic to the choreography of the fight scenes and is used throughout the feature in order to support the finale.

Working in tandem with the Director, Cutting Edge developed the look of the descension effect which was then shared with the other VFX studios involved. In total over 116 shots were delivered by Cutting Edge, also including digital doubles, matte painting, wire removals and other supporting effects.

According to Rangi Sutton, VFX Supervisor Cutting Edge, one of the most valuable contributions he and the Cutting Edge team made was to create an effect that struck the balance between a dynamic, fiery aesthetic and a sense of sentience.

“The effect represents a spirit, it’s not just an explosion, and it’s not a haunted house ghost,” said Rangi.  “We wanted the demons to appear like they aren't in full control but are still sentient.”

“It’s a film with a lot of fighting and many of our villains die, but it’s PG and there’s to be no blood: we had to work out how to make that exciting, violent and fun. We needed a signature look for the film that could play across many sequences and environments,” he said.

James McQuaide, VFX Supervisor Lionsgate, said that they brought Cutting Edge into the project right from the outset.

“Rangi and his group at Cutting Edge were the first VFX facility to be brought onto I, Frankenstein. We knew that the look of the Demon Descensions would be one of the key components to the success of the picture’s visual mythology and, therefore, wanted their involvement from day one,” said James.

“Not only did the Descension approach Cutting Edge developed look sensational in the 100+ shots they delivered (especially in 3D) but their willingness to think of this effect in story terms opened the door for what became the narrative of the picture’s finale,” he said.

According to Rangi, the Cutting Edge team had plenty of scope to value add to the project.

“When James first came to us, the idea of the descension effect and demon soul leading to the finale hadn’t yet been resolved. So we discussed what was required and what made sense in terms of the story, and started to experiment with the visuals,” said Rangi.

“Our spirits started off quite small, sprites almost. Scaling those up left it looking too supernatural for this film; we suggested blue wispiness for a short while, then there was a subsequent generation where the effect was green. We were steering clear of the flame palette and dynamic for a long time, not wanting it to appear like the sets should burn to the ground at the end of each sequence. In the end, we were all happy to walk the line between ‘natural fire’ and ‘spirit stuff’. These guys are demons after all!”

“We also had to decide what was going to happen to distinguish the importance and power of the characters - the higher ranking demons descend more spectacularly than the minions, and the boss descension is a logical progression from that,” he said.

Rangi explained that there were several challenges that had to be overcome in the process.

“Because the effect was developed in post there wasn’t any interactive lighting on set. We had to integrate the demon souls, often recreating the sets in 3D to cast spirit lights over them. LIDAR scans helped a lot with that. Plus there was the scale of the shots - we would choreograph up to 10 demon souls in a single shot, creating the chaos of a battle field,” said Rangi.

Technically, the complexity of the task required excellent process and pipeline design.

“We had multiple layering of simulations, each with a bunch of animation controls. The sheer volume of shots meant we had to package it up so our animators could take their path and timing blockouts through to the final effect. Houdini excels at this. Our render farm played double duty as a simulation farm, processing dependency trees of rigid body dynamics, fluid volumes, and particle effects,” said Rangi.

All of the 3D VFX work was completed in Houdini using Mantra for rendering, with Maya, Zbrush and 3dcoat for modelling work. Nuke was used for compositing.