‘The Curse of Clara: A Holiday Tale’ Premieres December 14 TORONTO -- Smiley Guy Studios is decking the halls with The Curse of Clara: A Holiday Tale, a new original animated special airing on CBC-TV as part of its holiday programming lineup. A young dancer’s dreams come true when ballet, hockey and the holidays converge. Inspired by the autobiographical short story “The Curse of Clara or My Big Fat Disappointment” by Vickie Fagan, the 30-minute special is set against the backdrop of The National Ballet of Canada’s The Nutcracker and the 1972 Summit Series, a Canada-USSR showdown that shaped hockey history. The Curse of Clara: A Holiday Tale stars Hockey Hall of Fame inductees Phil Esposito and Bob Cole (Hockey Night in Canada) and National Ballet of Canada Prima Ballerina Karen Kain as themselves with Sheila McCarthy (Little Mosque on the Prairie, Emily of New Moon) as the narrator, Sara Botsford (E.N.G., Legal Eagles, Still of the Night) as the ballet mistress and Saara Chaudry (Max and Shred, Degrassi) in the roles of Vickie and Clara.

In this heartwarming holiday tale, Vickie, a small-town girl, is accepted into the prestigious National Ballet School in Toronto, and lands the coveted role of Clara in the Company’s annual production of The Nutcracker. Things look like they couldn’t get any better and they can’t, because that’s when Vickie finds out about the mysterious “Curse of Clara”. According to local legend, the young girls that star in the production almost never go on to become professional ballet dancers. Thankfully, she has a good friend, the 1972 Summit Series, and imaginary mentor Phil Esposito to keep her “on pointe”.

The Curse of Clara: A Holiday Tale is written by Jeremy Diamond and Vickie Fagan and directed by M.R. Horhager (Chirp, I Hate You Red Light) and Mike Valiquette (Captain Canuck, Chirp). 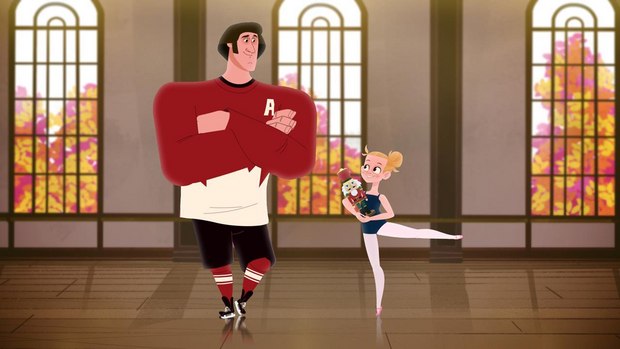