Produced with Starburns Industries for Facebook Watch, the multilingual 2D show follows the lives of three estranged siblings who reunite to wrestle for their inheritance but unleash a book-bound horror; new episodes drop every Friday. 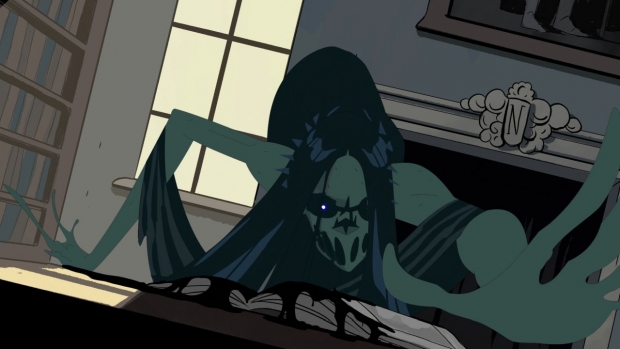 Crypt TV has released the first episode of their multilingual (Spanish and English) animated horror series, Woman in the Book, created for Facebook Watch. Starring Diane Guerrero (Orange is the New Black, Jane the Virgin), the 2D animated series of 10 10-minute episodes follows the lives of three estranged siblings who reunite at an aging Mexican hacienda to wrestle for their inheritance, but inadvertently unleash a book-bound horror upon them that has plagued their family for generations. Episodes drop every Friday on Crypt’s Facebook Watch page.

Watch the first episode… if you dare!

Woman in the Book is written by Eva Gonzalez Szigriszt and Pamela Garcia Rooney, and directed by Jeanette Moreno King and Jeanette Jeanenne. It is based on the 2017 Crypt TV original digital series of the same name, written and directed by Justin Martinez and produced by Allison Vanore. The new series is produced by Starburns Industries, known both Rick and Morty and Anomalisa, and Crypt TV. Jack Davis, Kate Krantz, and Darren Brandl executive produce for Crypt. James Fino and Simon Ore Molina executive produce for Starburns; Paul Young executive produces for Make Good Content.

In May of last year, Crypt announced the first project from their partnership with Abundantia Entertainment, one of the leading production companies in India. Chhori, a feature film based on the Hindi remake of the hit-Marathi horror film, Lapachhapi, is the first project in their collective effort to bring their monsters to India.

Previously, Crypt entered a 5-series deal with Facebook Watch in July 2019; it also partnered with Sony Screen Gems to reboot the 1960’s classic, 13 Ghosts. In 2018, Crypt TV completed a Series A fundraising in the amount of $6.2M, which brought their funding total to over $10M since opening their doors in 2015. Investors include Blumhouse Productions, Lerer Hippeau, NBC Universal, and Advancit Capital.