Makoto Shinkai’s latest film follows 17-year-old Suzume as she travels across Japan to close mysterious doors which, when open, usher in destruction and disaster. 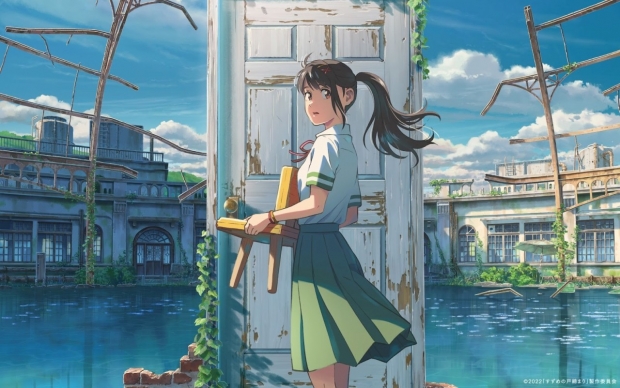 CoMix Wave Films, STORY, and TOHO have released a new trailer for Makoto Shinkai’s latest film, Suzume (Suzume no Tojimari), featuring performances from the newly revealed A-list Japanese cast. Shinkai is well known for his popular films Your Name (2016) and Weathering with You (2019).

Suzume is expected to open in Japanese movie theaters on November 11th, 2022 and will be distributed in all major territories beginning in early 2023. In North America, Crunchyroll is the sole distributor. In Latin America, Australia/New Zealand, the Middle East and portions of Europe, the film will be distributed by Crunchyroll and Sony Pictures Entertainment. In French- and German-speaking Europe, the film will be co-released by Crunchyroll, Sony Pictures and Wild Bunch International.

Joining Nanoka Hara as Suzume Iwato, and Hokuto Matsumura as Souta Munakata, is leading Japanese actress Eri Fukatsu, voicing Suzume’s aunt, Tamaki Iwato. Fukatsu won the Best Actress Award at the Montreal World Film Festival as well as the Japan Academy Prize for Outstanding Performance by an Actress in a Leading Role for her performance in Villain (2010). Most recently, she starred in the TV drama Come Come Everybody.

Fukatsu said, “In spite of my lack of experience, Director Shinkai and the rest of the crew poured everything into this project, which will be reflected in the emotion delivered straight into the hearts of audiences around the world.”

Matsumoto stated, “It was my first time playing a character in an anime film, and director Shinkai did a wonderful job of guiding me through to the best performances. He was very friendly and kept a positive mood during production, for which I am very grateful.”

In the film, 17-year-old Suzume encounters a young man named Souta who tells her he’s looking for a door. When she finds a single weathered door standing upright amid ruins, seemingly drawn by its power, Suzume reaches for the knob to open it.  Doors begin to open all across Japan, unleashing destruction upon anyone nearby. As this door opens, however, a mysterious white cat nicknamed “AristoCat” appears before them. He tells Suzume that he loves her, but tells Souta he’s in the way, and with those words, transforms Souta into a chair.  AristoCat, Souta, and Suzume journey together throughout Japan to close doors and unearth a long-forgotten truth.