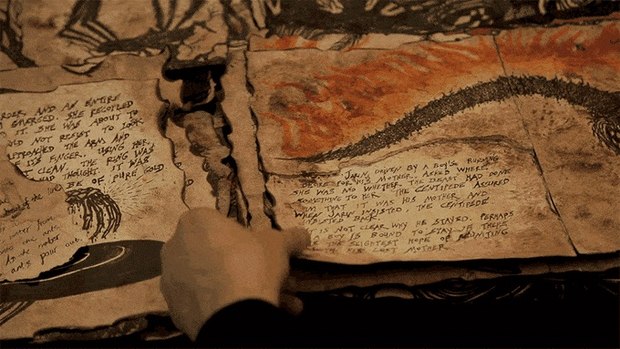 Award-winning independent animator Einar Baldvin, the director of The Pride of Strathmoor, has launched a new Kickstarter campaign to help fund production of “The Crawling King,” a 182-page fully illustrated dark fantasy novel to be published by Starburns Industries, the studio behind the Oscar-nominated stop motion feature Anomalisa and the hit animated series Rick and Morty.

Fully drawn, inked, painted and written by hand, the novel is a collection of stories from doomed city of Gyldenbrae and the surrounding countryside. Presented in the form of legends, fables, manuscripts, first-hand accounts and historical documents, “The Crawling King” invites readers to delve into the dark ruins of a world consumed.

Far from being an ordinary book, each original page has been dirtied and damaged, torn and burnt by hand before being photographed on black velvet. Each page bears not merely the horrid words of a terrible tale but the physical manifestation of the doom that came to Gyldenbrae. “The Crawling King” is a book whose physical appearance echoes the terror within.

The hardcover, cloth-bound book features handwritten stories and handmade art on every page, with deckled edges and an insignia embossed in gold on the cover. Art is photographed on black velvet and printed on high-quality, high-texture paper.

Baldvin is an award-winning animation director from Iceland who trained at CalArts and lives and works in Los Angeles. He is known for making terrifying, hand-crafted films, and his work has been exhibited all around the world at top-tier film festivals. His latest film, The Pride of Strathmoor, premiered at the Telluride Film Festival in 2014 and took the top awards at Slamdance, Florida Film Festival and Nordisk Panorama, among others. A lifelong fan of macabre fiction, “The Crawling King” is his first novel.

Rewards for the campaign, which seeks to raise $37,000 by September 14, include digital art and downloads of original stories, signed copies of the completed book, “infested portraits,” extra book pages, original art, hand-crafted artifacts and models, painted sculptures, and more. Head over to “The Crawling King” Kickstarter page to learn more about the project and lend your support.