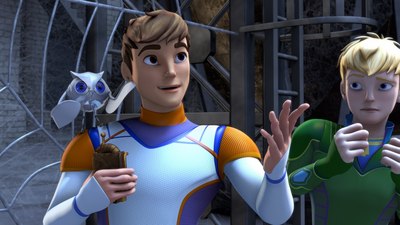 Aimed at 6–11 year olds, the HD CG animated comedy series was created by CMP's creative director Raja Masilamani, who also served as creative director at KidsCo. Masilamani’s latest creation chronicles the intergalactic adventures of Sindbad, an extra-terrestrial who lives on earth in the guise of a 14-year-old boy.

Presales for Sindbad & The 7 Galaxies have got off to a strong start, with the first deals already signed with free-to-air Middle Eastern broadcaster MBC3, India’s Sun TV and Nigeria’s free to air Be.Televison. The series is distributed globally by Munich-based Your Family Entertainment, except for Asia, which is managed by Hong Kong-based Lightning International.

Paul Robinson, director, Creative Media Partners commented, “Sindbad & the 7 Galaxies is a new animated comedy adventure for kids 6-11 that is a fresh re-imagining of a classic public domain property in CG HD. Sindbad and his friends have amazing adventures after school, saving distant worlds from disaster whilst having fun in the process. Each story has an environmental theme and jeopardy is overcome without violence or shoot em ups."

In the series, Sindbad lives a normal life doing normal teen things, going to school, hanging with friends, playing sports and computer games, and pushing the parental boundaries. The difference is that Sindbad has special powers and a spaceship in his basement, in which he and his pals embark on daring missions to save the seven galaxies from disaster. Inspirational characters, cool settings and fantastical storylines with pro-social messages combine with life lessons on the value of friendship to make Creative Media Partners’ debut production a genuine celebration of childhood.

The production is by Huhu Studios of New Zealand with animation in Taiwan and Beijing. The show is available for free TV, pay-tv and digital for television and mobile globally.