Based on the ‘Powerpuff Girls’ creator’s 2009 comic strip, the retro 2D animated series is inspired by classic comics from the 1950s; show follows the life of a boy named Kid who dreams of being a hero – but he’s not very good at it. 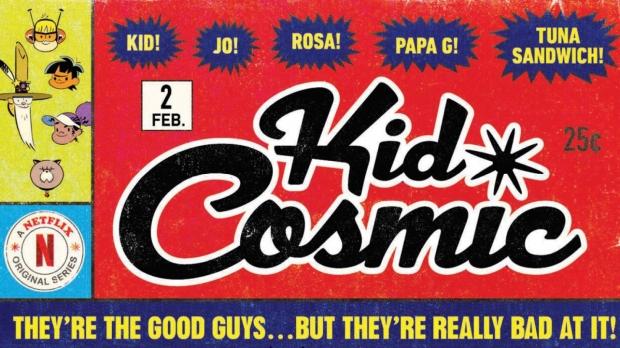 Netflix has announced the upcoming release of a new 2D animated kids’ series, Kid Cosmic, from veteran animator Craig McCracken (Powerpuff Girls), who first developed “Kid Cosmic” in 2009 as a comic strip about an odd boy who dreams of being a hero. The show premieres February 2, 2021. The hand-drawn retro visual style was inspired by classic comics like “Dennis the Menace” by Hank Ketcham, “Tintin” by Hergé, and the desert landscapes of “Krazy Kat” by George Herriman.

The series follows the adventures of Kid, an imaginative boy and wanna-be hero who lives with his free-spirited Grandpa in a sparsely populated desert town. His dreams seem to come true when he discovers 5 Cosmic Stones of Power in a wrecked spaceship. He forms a team of local heroes to stop an onslaught of alien attacks to steal back the stones. Though the Kid and his team are the good guys, they are really bad at it, so he learns that his fantasy of being a hero is very different from the reality.

The characters in Kid Cosmic were developed to emphasize how regular people of all ages, genders, and backgrounds can be heroes. While the comedy and action are about them using their powers to fight off alien invaders, the heart of the story is about them learning that real heroes help, not hurt, and that you don’t need superpowers to be a hero.