Produced using Cinema 4D, Redshift and Red Giant, ‘Pop Paper City,’ LoveLove Films’ all-new series, follows a group of paper characters who go on crafting adventures together with the help of their live-action guardian, Helping Hand; the show launched last week in the U.K. and will soon roll out globally. 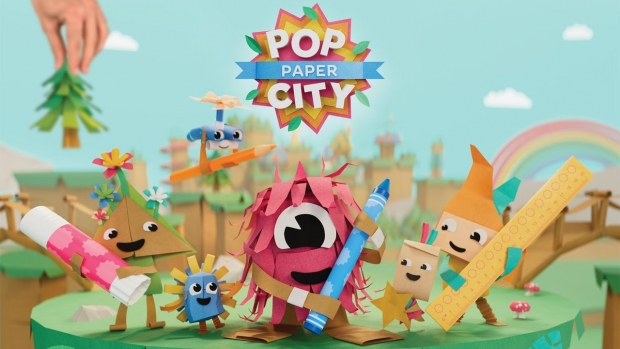 LoveLove Films has just shared that the studio used the Maxon One animation, rendering, and motion design product family to create their new 3D animated children’s series Pop Paper City. The show premiered on the U.K.’s Channel 5 (Paramount) Milkshake! on November 12, with a global rollout set to follow. U.K. animation powerhouse Aardman, the studio behind legendary animated franchises like Wallace and Gromit, Shaun the Sheep, and Chicken Run, is distributing the series.

The show follows a group of paper characters who go on crafty adventures together with the help of their live-action guardian, Helping Hand. Comprised of 52x11’ episodes, it is the first children’s series to be produced using Maxon’s software, which includes Cinema 4D, Red Giant, and Redshift.

In the series, Pop Paper City is the capital of a captivating paper world. Plom, Phoebe, Mae-Mae, Hooper, Zip, and Fly are a group of unique paper friends who live there and, through their adventures, find new ways to have fun together – such as cowboy adventures, pirate treasure hunts, and even exploring outer space! When the friends need to make a craft, they call for Helping Hand, who helps them craft something they can use on their adventures. The series’ visual style uses paper textures to create an immersive paper world for the characters to explore, and their endless adventures encourage little ones at home to get crafty too!

The characters explore various locations throughout the series, including beaches, vast forests, underwater environments, even other planets. The blend of adventures and crafts inspires kids to build their own paper creations at home.

Using the Maxon One family of products, including Cinema 4D, Redshift, and Red Giant, and working in partnership with the software company, the creative team produced the series with Maxon offering regular technical support and guidance.

“We’re so thrilled that Pop Paper City will be airing very soon,” commented producer Georgina Hurcombe. “It’s been such an amazing journey, and we can’t wait for kids everywhere to see this unique, creative, and fun-filled series. Our partners for this series have been incredible, including our wonderful distributors Aardman and our U.K. anchor broadcaster Channel 5’s Milkshake! We are also incredibly grateful to Maxon for all their support throughout the production of our show and are delighted to be the first full kids’ series created in Maxon One.”

“At Maxon, our top priority is to inspire and enable creativity,” added Maxon CEO David McGavran. “We are so pleased LoveLove Films chose Maxon One to bring Pop Paper City to life and, in turn, fuel creativity in children everywhere. It is incredibly rewarding to see our tools used to create such a unique and innovative project. We take pride knowing we play a small part in this show engaging and entertaining young audiences.”