‘A COVID Christmas’ Shares a Cute and Important Holiday Message

As told through the eyes of a kid, this animated Anti-Viral Christmas story features a holiday filled with masked and socially distanced activities. 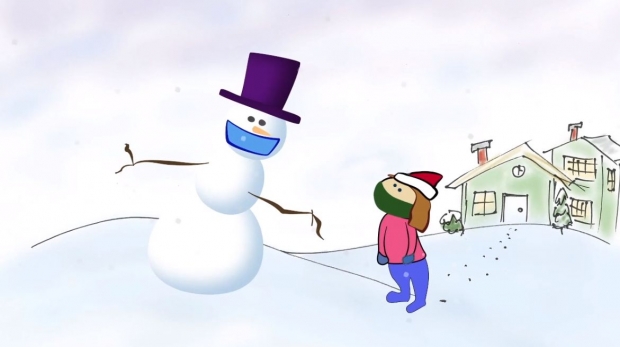 Christopher Grotke from MuseArts has just shared a charming 2D short, A COVID Christmas Anti-Viral Holiday Special, made especially for a special year, featuring a masked snowman, masked singers, a socially-distanced Santa, toy shopping, Mom, and a decorated tree by a fire in a story told through the eyes of a young kid.

According to Grotke, he was sketching out possible Christmas card ideas featuring masks and socially distanced Santas when he realized that with a bit of extra effort, he could string them together into a short holiday special.

“Every year we watch Charlie Brown Christmas after Thanksgiving,” he tells AWN. “I've always loved the simplicity of the show, and always admired how quickly they threw it together. This is partly in honor of that work.  There's a nod to A Christmas Story in here as well.”

Regarding the production, Grotke explains, “I like finding ways to be efficient in animation and COVID presented a perfect opportunity... lip sync is made much easier when everyone wears a mask! I had a cousin record his daughter for the child's voice. Animation was done in Moho Pro 12.5.1 on a Mac (Big Sur). Backgrounds were scanned in and painted using Pixelmator Pro. I used Garage Band loops to try to mimic the jazzy tracks of Vince Guaraldi.”

Regarding viewers, Grotke hopes the cute short gives people a chuckle and reminds them to wear a mask. “I hope it goes anti-viral,” he concludes.