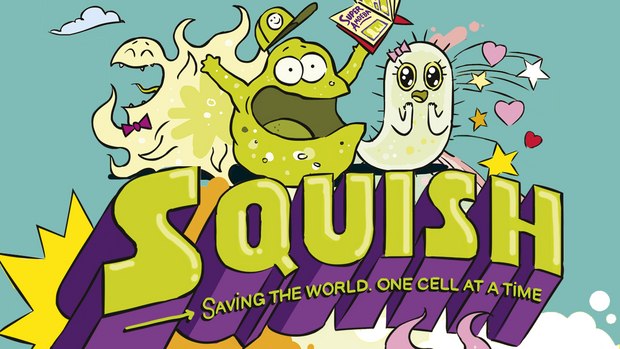 PARIS & TORONTO -- Cottonwood Media and co-production partner Shaftesbury have announced a new development deal with Corus Entertainment’s TELETOON in Canada for its animated comedy Squish, while top French Kids net Gulli ramped up its prior development deal to a pre-buy.

“It is very exciting that Squish is moving into the key Canadian market. Cottonwood’s raison d’être is to produce premium content for global channels and having a top North American partner such as TELETOON reaffirms this goal,” commented Cottonwood Media Producer and Founding Partner David Michel. “We are confident that TELETOON will help the TV show attain the same massive success the books have had in both Canada and the US.”

“Squish has already succeeded in entertaining kids in Canada through its graphic novels and we are thrilled to develop this concept for TELETOON,” said Athena Georgaklis, Director of Content, TELETOON. “We look forward to joining this list of talented writers and producers to bring these stories to life.”

Aimed at 6-11 year olds, Squish is an animated comedy about the secret life of Amoebas (yes, Amoebas!) looking to survive life in the cutthroat world of single cell organisms, not to mention school! The series is based on the original and hilarious New York Times best-selling graphic novels by Jennifer Holm and Eisner Award-winning creator Matthew Holm. Published by Random House Children’s Books, over one million copies of the existing six books have been sold to date, with a new book to be published yearly.

Gulli and Cottonwood entered a development deal for the series in mid-2015. Gulli has since ramped up its commitment with a pre-buy of all digital and broadcast rights for France.

Caroline Cochaux, Managing Director France & International at Lagardère Active (Gulli) commented, “We are still delighted to be a part of this new animation company’s first production, we are proud to be partnering up with Cottonwood Media on this adventure. Comedy is a beacon of Gulli’s programming and a natural fit for our young audience, so we are especially enthusiastic about working with all this creative team for Squish!”

Squish is one of five projects on Cottonwood Media’s slate, which includes The Ollie & Moon Show, another original best-selling book from Random House Children’s Books sold to Sprout and Netflix.