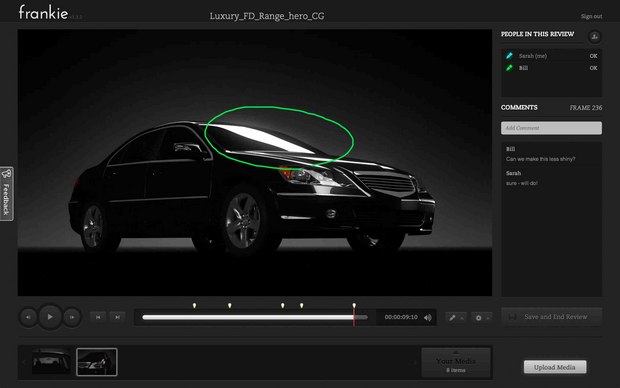 Cospective released Frankie 2.3, an update of its browser-based video review tool that now allows users to review video in full screen mode and download original media files. These significant additions, along with increased upload speeds and many other fixes, will greatly enhance the user experience of Frankie. Ad agencies, production companies and postproduction facilities now have an even faster, more efficient tool for internal video review as well as for client review and approval.

The full screen viewing mode allows the use of the drawing tools, along with zoom and pan. Reviews can be named with a text label that appears on the Projects page, making archiving of video reviews more logical. Users will also notice a huge increase in the speed at which their media files are uploaded.

“Many of these upgraded features came in response to Frankie user feedback,” said Jeremy Pollard, product manager for Frankie. “We appreciate their suggestions and were happy to incorporate them as quickly as possible.”

Anyone viewing a video in a Frankie session – guests as well as the host – can now download the original media files under review with one click. This is in addition to viewing the transcoded version of the video within Frankie. This opens up new workflow possibilities, as Frankie can now be used to deliver final versions as well as reviews of works-in-progress.

“For some users this means that they could start using only Frankie for their client reviews,” said Jeremy Pollard, project manager of Frankie. “This will save them time and money each month by making their current collaboration tool redundant.”