Dedicated iOS app for web-based review and approval tool Frankie brings all the collaborative, cloud-based functionality of Frankie to the palm of your hand. 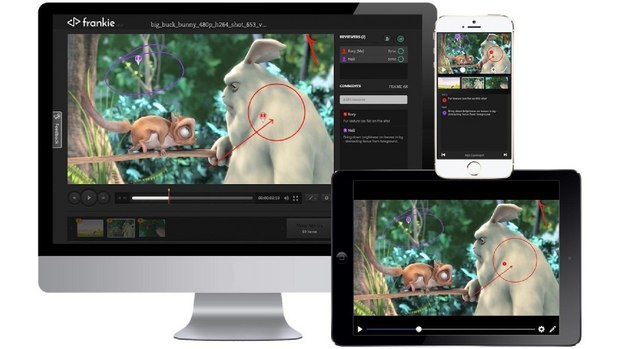 ADELAIDE, AUSTRALIA -- Cospective, creator of real-time review solutions for the visual effects and animation industries, has released its dedicated iOS app for web-based review and approval tool Frankie. The new app brings all the collaborative, cloud-based functionality of Frankie to the palm of your hand – now you can join in and review from any iPhone or iPad, whatever your location.

Whether you’re sipping an espresso at a café or heading to the airport in the back of a cab, the Frankie app will enable you connect and collaborate with ease. It’s completely flexible, fitting into your schedule, rather than vice versa, and boasts all the functionality of a desktop session, the only difference is now you can take it wherever you go.

Guests who receive an email invite to a Frankie session can click the link via their phone, which will automatically launch the app. From that point on it’s the same as a normal session: the Frankie app allows users to play, pause, scrub, draw on frames and make text notes, all in sync with everyone else in the review. App users can even interact with other users still working on desktop.

Sessions in the Frankie app will occur in a guest-only view, but outside of that, it’s the same Frankie experience in a simpler, easier, mobile-friendly interface, it’s Frankie on a phone!

Rory McGregor, Cospective CEO, commentend, “Frankie is the easiest way to share and collaborate with video in real time regardless of user location. Using the new Frankie iOS app, users can now connect not just from anywhere in the world, but wherever they happen to be during the day, whether that’s at their desk, on location or even en route.”

“Frankie had already transformed the way we approach reviews and approvals of our projects. The new iOS version will add a whole new dimension to the way we work with our clients and the service we offer them,” said Chris Allen, CherryCherry Executive Producer. “My daily schedule can be very unpredictable, so knowing I can jump in on sessions just as I would from a desktop, wherever I may be, is a hugely beneficial step forward for the product.”

Matthew Poliquin, Ingenuity Engine Executive Producer, added, “I'm really looking forward to using the new Frankie iOS app, as I and our other producers and supervisors are always running out the door to meetings, spotting sessions, and shoots. The app will allow us to continue providing quick and clear feedback to our artists back at the studio.”

Android app to come. The Frankie app is currently iOS only, but an Android version is due later this year.