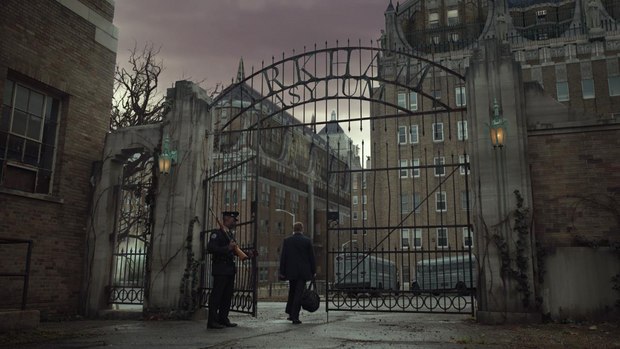 HOLLYWOOD – FOX television series Gotham is much more grounded, focused on crafting a believable world rooted in emotional drama, in contrast to the intense action of the big-screen Batman flicks. While this young Bruce Wayne is the nucleus of the story, it’s less an origin story of Batman, more an origin of the characters that will ultimately guide his life: characters like detective Jim Gordon and the villainous Penguin. CoSA VFX has taken charge: although eye-popping visual effects are needed at times, the studio’s core task has been creating a truly convincing vision of Gotham City.

Sometimes that means building upon real-life shots, but other times, it’s meant generating entire CG locations. In either case, the visual effects needed to blend in perfectly with the Gotham’s gritty look. CoSA VFX has achieved tremendous results, earning an Emmy nomination for its work on the first season.

However, despite the final quality of the output, TV deadlines can be incredibly challenging, with about 10 days typically provided to complete all of an episode’s shots, and multiple episodes requiring attention at once. CoSA VFX uses ftrack to manage its VFX work, and that’s what allowed the team, which is split between Los Angeles and Vancouver, to stay on top of the hectic schedule while producing stunning, high-profile work. CoSA VFX has expanded rapidly since starting out in 2009 in a Burbank, California garage, growing from just four people to a two-studio team of 100. Although the team had other noteworthy projects prior to Gotham, including Emmy-nominated contributions to Revolution in 2013 and Marvel’s Agents of Shield and Almost Human in 2014, Gotham was the first episodic TV series where it ran all of the VFX supervision, creative development, production management, and shot production.

The first season of the show, which spanned 22 episodes, required more than 1,500 VFX shots from CoSA, that’s approximately 65 per episode. And season two hasn’t been any less intense, given the increased focus on developing the classic Batman villains we know and love to loathe.

“CoSA’s shots run the gamut from subtly ‘Gothamizing’ real-life New York City locations to creating 100% computer generated buildings and environments,” executive producer, Joseph Bell explained. “The exterior of Arkham Asylum, for example, was filmed outside a real hospital in Staten Island, and then extensively modified by adding CG roofs, sculptures, and weathering. As the series progressed, CoSA built CG assets for more and more of the location, until we had the ability to create entirely computer generated-shots of Arkham featuring dynamic camera moves, without any practical photography.” There were shots that also need a little more “pop,” such as hallucinations featuring the character Scarecrow, as well as people floating away into the sky attached to balloons. CoSA’s challenge came in balancing the need for a realistic, human world with the fantastical abilities you’d expect from the classic rogues’ gallery of villains.

“The show has a gritty, naturalistic feel that requires seamless and convincing visual effects,” continued Bell. “We’ve tried to set and sustain a very high bar in terms of the quality of the imagery, sequence after sequence, week after week. If we’ve done it well, the audience won’t notice some of our best work, because it looks so real. One of the challenges of episodic television is that a show can have heavy VFX needs one week and very few the next, it depends on the story of each episode, which often isn’t known very far in advance.” Bell added, “Rather than having a team dedicated to Gotham who have too much to do one week and too little the next, our artists are frequently assigned shots on multiple shows, or find themselves pivoting from one project to another. Almost everybody at our Los Angeles and Vancouver studios works on Gotham, but only two to three key team members work exclusively on the show.”

With such a fluid workforce applying their talents to multiple projects at any given time, a management solution like ftrack proves all the more essential.

CoSA first started using ftrack about a year ago, and now uses it with every project that comes through the studio, whether it’s TV series work, feature films, mini-series, or marketing videos.

“We typically have a number of episodic TV shows in-house simultaneously, each delivering a new episode every 2-3 weeks,” said Andrew Robinson, CoSA VFX’s production manager. “That makes for a lot of deliveries throughout the course of a TV season! Each episode can have anything from a handful of shots to 250+ in the case of a VFX-heavy pilot.” Prior to ftrack, the studio used a different shot-tracking tool, but only a few people in the studio were actually plugged into it. By shifting to ftrack for broader management capabilities, CoSA now has everyone onboard the same software, with each artist given an individual login.

“ftrack allows us to target shot-specific information to only the people who need it, and equally importantly, to avoid inundating people who don’t,” commented Robinson. “Furthermore, tools developed through the ftrack API have allowed us to automate various steps in the shot tracking process. All of this means that our production team is able to really focus on providing our clients with a great experience; our tools support an efficient, precise workflow, all bubbling away in the background.”

When CoSA begins work on a new episode of Gotham, the studio starts a new project in ftrack and compiles a shot list based on what’s sent over from the show’s editorial team. Having a shared platform that all artists are connected to proves particularly crucial with two teams: supervisors will assign shots to either the Los Angeles or Vancouver studio, and then to specific artists, but tasks often span both locations. “Our workflow on Gotham reaches across both locations: a matte painting created in Los Angeles may be composited in Vancouver, or vice versa. For this reason, ftrack gives us tons of flexibility in managing our resources day-to-day,” said Robinson.

“CoSA’s artists use ftrack as a collaboration tool, exchanging information about elements and work in progress with each other and with supervisors across both locations,” he continues. “Dailies for Gotham are held in Los Angeles, with notes entered into ftrack during the session, which providing artists in both L.A. and Vancouver with prompt feedback. We also use ftrack to drive regular client deliveries, track creative notes, log artist time against individual tasks, and supply our crew with schedule information for multiple projects.”

With ftrack used in so many ways across so many projects, Robinson praised its sidebar function for allowing in-depth access to information without interrupting the creative process.

“It’s so easy to do a deep dive into information about a shot or asset without losing the context,” he asserts. “The sidebar function also makes note-taking in meetings a breeze. When you’re taking notes in dailies, say, you can’t stall a room full of supervisors and artists while you dig around in the database. Thankfully, ftrack’s user interface allows our production team to keep up, while making the information available to the whole team immediately.” Also beneficial is ftrack’s easy integration with CoSA’s top tools, including MODO, NUKE, and Maya, via the customizable ftrack API. CoSA is able to have slate and scene info pulled right into the work from ftrack, saving artists crucial time on each shot. With only about 10 days allotted for their work on each episode of Gotham, those saved minutes really add up. And CoSA has done custom work to make ftrack work even harder for them, better serving their existing pipeline.

“CoSA’s pipeline team has developed a number of standalone apps that pull shot data out of ftrack, move and create folders on our servers using information from ftrack, and publish updated shot statuses, notes and version numbers to ftrack,” Robinson explained. “Two key areas in which we’ve become much more efficient thanks to these tools are ingesting footage into our CG pipeline, and packaging up deliveries based on client specifications.”

CoSA plans to do much more custom work in and around ftrack, as well. They’re working on making ftrack an integral part of their payroll system, eliminating the need for separate timecards. Artists will be able to log time on individual tasks, and compare that against how much time had been allotted as part of the bid. They also plan to implement custom dashboard and automated file sharing between the two CoSA locations.

ftrack’s custom development toolset is intended for exactly this kind of use, to allow studios to enhance the core project management capabilities to meet their specific needs, and all in as easy and accessible a way as possible. CoSA VFX has done just that. All of this custom development work has made a tangible impact on the production of Gotham at CoSA. Turning around a constant flow of VFX shots for TV is tough work, but CoSA has not only delivered excellent results week after week with Gotham, but has also been recognized for those impressive efforts.

“An episodic TV show like Gotham is like a marathon made up of sprints,” said Bell. “Workload fluctuates constantly from one episode to the next, and the visual effects team is prepping one episode even as they’re starting work on another and finishing a third. It’s great that ftrack enables us to assign crew to Gotham, and all our shows, in a very flexible way. It’s also great for tracking the smallest details on the largest projects, which is exactly what a season of Gotham needs.

“When you’re up against hard airdates, turning around hundreds of shots with very specific creative notes each month, the quality of your studio’s production tools and production workflow becomes very apparent to clients,” Bell affirmed. “Our clients don’t just come to CoSA for spectacular visuals. They return to CoSA for an organized, responsive, and reassuring customer experience. As such, the efficiency with which ftrack allows us to create, update, and communicate about shots is a vital cornerstone of CoSA’s ability to not just deliver on time, but to do so with intelligence, precision, and style.”