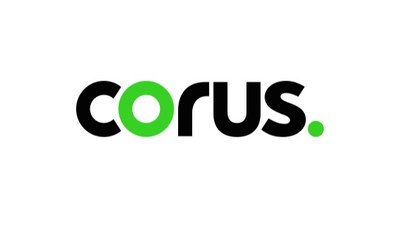 “This is a landmark day for us,” commented Doug Murphy, President and Chief Executive Officer. “As a combined company, we are creating an integrated media and content powerhouse that gives us the competitive scale to grow both domestically and globally. With our strong media brands, compelling content and talented team, this transformational acquisition marks a new beginning that builds on our strengths and positions us well for future growth.”

“The redesigned Corus logo represents the start of a new chapter for us. It’s a powerful visual cue that the new Corus has arrived,” added Murphy.

“Corus and Shaw Media each have extraordinary talent across all levels, and we are confident that we have put in place a team and structure that will enable us to immediately advance our strategic priorities,” said Murphy. “There remains much work to be done, but we have a plan in place and are moving quickly to integrate these two companies and realize the benefits of the combined organization.”

“We would also like to thank the independent Special Committee of Corus, comprised of Fernand Bélisle, Mark Hollinger, Wendy Leaney and Terrance Royer, for their diligence and invaluable guidance throughout this entire process,” said Mr. Murphy.

The shareholders of Corus, excluding the votes of certain interested parties, approved the Acquisition at a special meeting of shareholders held on March 9, 2016. The Acquisition was also approved by the Canadian Radio-television and Telecommunications Commission on March 23, 2016.