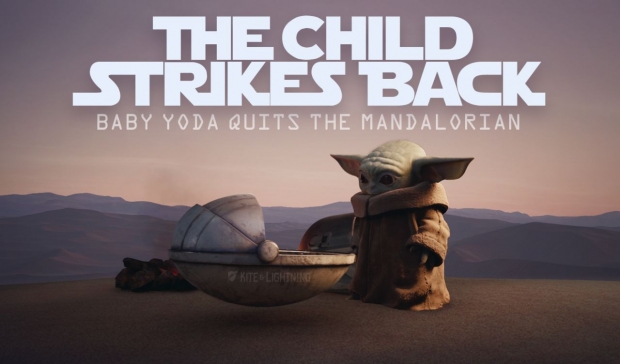 In the future, will talent agents be just as smarmy as they are today? For Kite and Lightning co-founder Cory Strassburger, the answer is “Yes.” But that’s exactly the type rep needed to “get Favreau onboard” for a set of Jedi-level star demands by Baby Yoda in the director’s hilarious new short, The Child Strikes Back.

Strassburger performed, voiced, and animated the entire seven-minute short from concept to completion in just over two weeks. He took weekends off from his current game in development, Bebylon Battle Royale, to make the short, testing the company’s real-time animation pipeline in the process. Traditionally, studio-quality animated sequences require teams of artists, banks of high-performance computers, and months of render time. However, Strassburger demonstrated - with an iPhone, Epic Games’ Unreal Engine, and inexpensive pre-built digital environments and characters purchased online - how real-time game technology has the potential to fundamentally alter how animation is produced.

In the comedic short, which riffs on the hit Disney+ live-action series, The Mandalorian, Baby Yoda (Grogu) finds his voice and makes his opinions clear in a behind-the-scenes negotiation with his agent. All the sets, including Baby Yoda’s apartment, the desert environment, the stormtroopers, and agent character, were low-cost assets purchased via the Unreal Marketplace and CG Trader, then modified to fit the storyline. Strassburger performed and voiced all the characters from the comfort of his living room using a head mounted iPhone camera rig, and the Unreal Live Link Face iOS app to map his performances directly onto characters in Unreal Engine.

“The agent was a character I found on the Unreal Marketplace which I modified, adding a series of facial expression poses so the iPhone could puppet his face with my face performance,” Strassburger explains. “This whole project was about not trying to spend time doing anything elaborate or any custom builds - most everything was art directed from what I could find online, or plug-and-play from existing assets. A major studio feature has armies of creative teams to build fantastical sets.  On a project like this, there was no budget to custom build the perfect settings. But nowadays virtual filmmakers have vast libraries of marketplace props and environments at their fingertips, which are easily customized. All you need is a story to tell!”

The director goes on to note, “This project demonstrates how these new production tools can greatly reduce the number of resources a big studio would need, particularly when it comes to render farms.  For content creation, assuming motion-capture is the source for animating their characters, it could reduce the size of the mocap team.  As a pipeline for previs, it could allow a big studio to block out their content incredibly fast and at very high quality, thus working out a lot of issues before the expensive animation, polish, and rendering stages.”

“And since the Unreal Engine is a real-time renderer, this project also shows how good a live animated show could be,” he adds. “Technically speaking, I could puppet Baby Yoda and live stream that performance on YouTube at the quality you're seeing in the short. If I had friends puppet the other characters, we could stream a live show on YouTube at this same quality.”

For Strassburger, a life-long fan of the Star Wars universe, this was a passion project; it presented an opportunity to test some of the newest animation and virtual production methods that have taken off in the work-from-home era. In the same way that affordable video cameras and editing tools democratized filmmaking and led to a flood of new creators on YouTube, new animation methodologies are paving the way for individual creators to produce studio quality animated stories like this one from home.

For more information subscribe to the Kite & Lightning YouTube channel to stay up-to-date on their latest productions.