The animation studio lends its famed characters, patterns, and iconography from ‘Missing Link,’ ‘Kubo and the Two Strings,’ ‘The Boxtrolls,’ ‘ParaNorman’ and ‘Coraline’ to ‘The Converse By You x LAIKA Chuck 70’ collection – launching November 30. 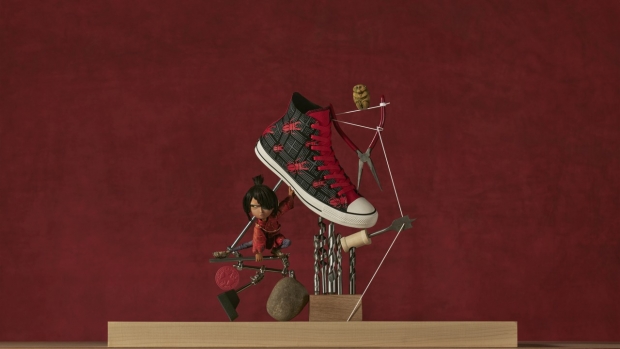 Because we’re in the holiday spirit and we love animation (of course!) and LAIKA (like, duh!), and because it’s time for “animated” holiday gifts, it’s only fitting to share that the renowned animation studio has teamed up with the Converse, the famed maker of “All Stars” sneakers, lending its famed characters, patterns, and iconography to “Converse By You x LAIKA Chuck 70” – launching November 30 online at Converse.com.

The studio’s five Oscar-nominated films, Missing Link (2019), Kubo and the Two Strings (2016), The Boxtrolls (2014), ParaNorman (2012), and Coraline (2009), will be featured in a special collection. Fans can design their own LAIKA Chuck 70 with 20 options inspired by each film, including an all-over print that encompasses all five movies – featuring callbacks and motifs, such as Coraline’s star sweater and ParaNorman’s bedroom poster.

And… in anticipation of the worldwide release of the studio’s highly anticipated film, Wildwood, based on the books by The Decembrists’ lead singer Colin Meloy, a special Wildwood Converse Collection of footwear and apparel will launch alongside the film’s worldwide release.

“LAIKA is known for its unique approach to filmmaking, enhancing the artisanal stop-motion technique with technological innovations,” said David Burke, LAIKA’s Chief Marketing Officer and SVP, Operations.    “Our strategic marketing and retail partnerships are based on a shared ethos: originality, individuality, and bold creativity. These are hallmarks of the Converse brand, and we’re thrilled to be collaborating with its extraordinary creative team to bring LAIKA fans a truly meaningful and precedent-setting opportunity. We’ll build upon this partnership as we approach the release of our latest and most ambitious film, Wildwood, which has a bold and original design aesthetic that will lend itself to this creative enterprise.”