Conrad’s ‘Heart of Darkness’ Gets Animation Treatment on Instagram

Animator Sascha Ciezata releases a multimedia graphic novel based on Joseph Conrad’s ‘Heart of Darkness’ with daily episodes on Instagram. 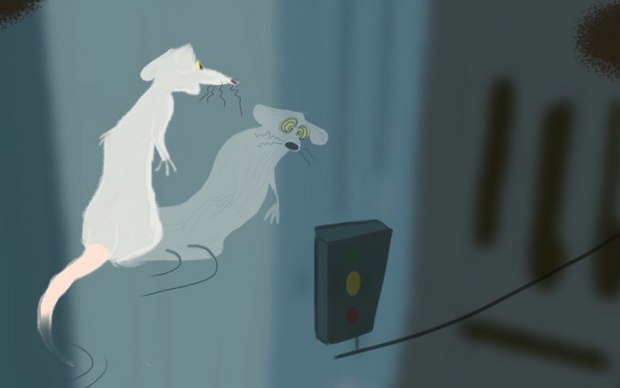 A subway rat's journey through hurricane-ravaged NYC to meet the elusive Rat King, animator Sascha Ciezata’s Heart of Darkness is a multimedia graphic novel unfolding in daily episodes on Instagram.

The series takes place amid the stormy saga that was Hurricane Sandy, throwing little Marley into the murky mayhem beneath the city’s abandoned streets. Mirroring the frame of Conrad’s story, Marley sets out through the snaking river of flooded subway tunnels on behalf of the New York City Trade Company to seek out the mysterious Rat King, Kurtz.

“The episodic nature of Heart of Darkness makes Instagram the perfect distribution platform with daily ‘episodes,’ turning it into a kind of social media graphic novel,” Ciezata tells AWN. “It's my hope to one day turn it into an animated feature film.”

“Heart of Darkness was something I first conceived three years ago when I was living in New York,” continues Ciezata, who completed the project over the last few years in between freelance gigs. “I was doing animation there for a documentary and riding the subways to work. I always wanted to adapt the story to NYC but couldn't figure out how to make it work live action. Everything came together when Hurricane Sandy struck Manhattan, in 2012, and the city literally went dark for a week. Telling the story with subway rats became the inspiration after reading a few articles about how the storm affected the city's rat population. Sandy was literally ‘the perfect storm,’ narratively speaking.”

The quasi-realism of Ciezata’s adaptation is augmented with the multimedia style of his series. In each episode, the animation is complemented with real photographic imagery of New York and set to a recording of Union Square's famous drummers. “I do all of my animation on an iPad Air using the Animation Creator HD app and Sketchbook Pro,” Ciezata details. “I thumbnail and storyboard everything on paper first. In order to achieve the kind of grimy realism I wanted a lot of the backgrounds are actual photographs I took throughout the city, which I then edited in Photoshop. I then incorporated the animation to interact with these photos in layout.”

Follow Marley’s adventurous tail down into the dark heart of New York City with the clips below, and look out for new installments of Ciezata’s Heart of Darkness daily at 7pm PST/10pm EST on the DarkHeartNYC Instagram:

(3/3) They call me MARLEY. I'm a navigator and cartographer for the Trade Company. I go places other Rats wouldn't dare, mapping abandoned tunnels and the like. It's a hazardous profession, but I have a nose for adventure... (Be sure to check back here tomorrow and watch Marley's adventure continue)

This particular #NYC #urbanlegend is very real, I assure you! Lucky for me I'm quick witted and nimble on my feet. This came as quite a shock to my pursuer. Of course, I didn't make it completely unscathed. When I came too I discovered my fur had turned completely white! #tobecontinued