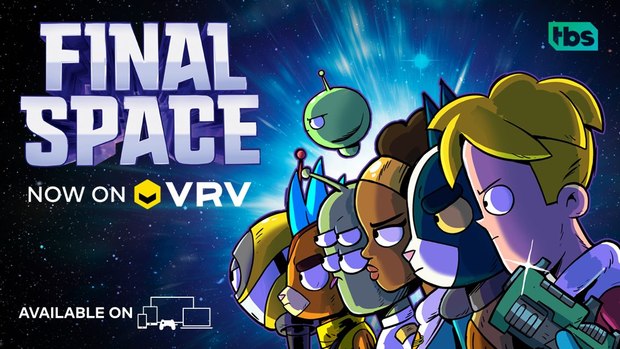 VRV continues to expand its slate of WarnerMedia offerings with the addition of TBS’ Final Space, Adult Swim’s Mike Tyson Mysteries and the classic Warner Bros. Animation series Jabberjaw to their programming lineup. Starting today, VRV becomes the exclusive SVOD home for season one of TBS’ Final Space, the sci-fi comedy series about a spaceman named Gary and his mysterious new alien friend Mooncake, created by filmmaker, actor and YouTube creator Olan Rogers and executive produced by famed comedian and talk-show host Conan O’Brien. The first four episodes of the show’s inaugural season will be available immediately, with new episodes airing every Wednesday. Season two, currently in production, and all subsequent seasons will also be available as part of the deal.

“With Final Space, we created a show that pairs genuine emotion and real stakes with comedy and premium animation, making it a perfect fit for VRV,” Rogers commented. “We hope VRV’s community loves the series and catches up on all the action before season 2 premieres next year.” The show stars Rogers, Fred Armisen, Tom Kenny, David Tennant, Tika Sumpter, Steven Yeun and Coty Galloway.

All four seasons of Mike Tyson Mysteries and Jabberjaw will be available on VRV in early 2019, with more WarnerMedia content to be announced in the new year. This is in addition to the huge library of classic WarnerMedia content coming to the streaming platform as part of their recently announced Boomerang channel, which launches this coming November 13.

VRV has made a series of recent moves with traditional media partners outside the WarnerMedia family to incubate their OTT and streaming offerings. These include the recently launched NickSplat, with classic series such as Rocko’s Modern Life, Rocket Power and CatDog, in close collaboration with Viacom, and the just announced addition of HIDIVE and their slate of over 500 dubbed, subtitled and uncensored anime offerings.