Studio Ghibli’s Oscar-nominated ‘The Tale of the Princess Kaguya’ lands on store shelves with this week's home entertainment releases on Blu-Ray and DVD. 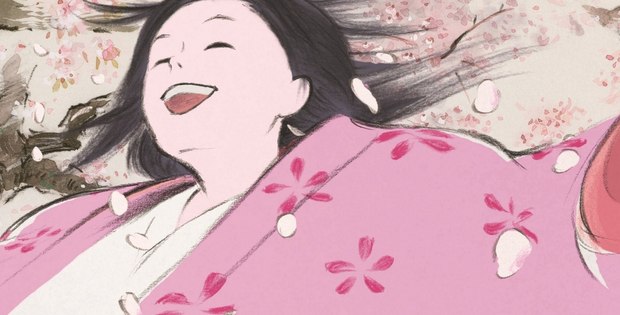 Studio Ghibli's 'The Tale of The Princess Kaguya'

Studio Ghibli’s Oscar-nominated The Tale of the Princess Kaguya lands on store shelves with the rest of this week's home entertainment releases on Blu-Ray and DVD. Check out the titles below, and let us know which ones are on your wish list. From the studio that brought you Spirited Away, My Neighbor Totoro, and The Wind Rises comes a powerful and sweeping epic that redefines the limits of animated storytelling and marks a triumphant highpoint within an extraordinary career in filmmaking for director Isao Takahata. Found inside a shining stalk of bamboo by an old bamboo cutter (Caan) and his wife (Steenburgen), a tiny girl grows rapidly into an exquisite young lady (Moretz). The mysterious young princess enthralls all who encounter her -- but ultimately she must confront her fate, the punishment for her crime.

The 3-disc Blu-ray includes the film on Blu-ray and DVD as well as a separate DVD with a feature-length documentary on the making of the film, titled Isao Takahata and His Tale of The Princess Kaguya. Also included are Japanese trailers and TV spots and U.S. trailers. POKeMON the Movie: Diancie and The Cocoon of Destruction (2015)

The first feature film of the new POKeMON XY property, POKeMON the Movie: Diancie and The Cocoon of Destruction is inspired by the newest generation of POKeMON X and POKeMON  Y video games and is the 17th and newest feature film in the venerable POKeMON  franchise.

Everyone’s favorite heroes -- Ash, Serena and Pikachu -- as well as favorite villains Team Rocket, return for a thrilling adventure introducing an exciting cast of new characters, including Xerneas, the fabled Life POKeMON and Yveltal, the POKeMON of Destruction.

In the underground Diamond Domain, where many Carbink live, the mythical POKeMON Diancie serves as Princess. The Heart Diamond that sustains the land is beginning to fall apart, and Diancie is not yet strong enough to create a new one. Can Ash and his friends help Diancie discover its true power and save the Diamond Domain? It’s one giant step for dog-kind as Scooby-Doo and the gang blast off for an epic journey into outer space in this must-own, original, new film from Warner Bros. Animation. After winning the last five seats in a lottery, Scooby-Doo, Shaggy, Fred, Daphne and Velma are off to space in billionaire Sly Barron’s brand new ship, the Sly Star One, a space tourism vessel setting off on its inaugural voyage. It’s all gravity-free fun until a mysterious alien begins to destroy the ship! As the vessel breaks down, the crew is forced to land on Sly Baron’s base located on the dark side of the moon. Will the gang unravel this alien mystery? Will Scooby and Shaggy find snacks on the moon? Fans will want to hop on board, fasten their seat belts and journey to the outer limits with Scooby-Doo to find out.

Bonus features include the Space Travel is Groovy! featurette. Join Mindy Cohn, the voice of Velma, as she introduces viewers to some of the real world technology and training that is part of modern space flight. Game of Thrones -- based on George R.R. Martin's best-selling book series "A Song of Ice and Fire" -- follows the noble families of Westeros as they battle for control of the Seven Kingdoms. In Season 4, while the Lannisters' hold on the Iron Throne remains intact, new and ongoing threats from the south, north and east threaten to tip the scales. As Stannis Baratheon and Daenerys Targaryen continue to grow their respective armies, the arrival of the Lannister-loathing "Red Viper of Dorne" poses a more immediate danger. In the north, the depleted Night's Watch seems overmatched against the advances of Mance Rayder's army of wildlings, which in turn is being trailed by an even more formidable foe: the undead White Walkers.

Extras include the 30-minute documentary, “Behind the Battle for the Wall,” which follows the cast and crew as they create the most ambitious battle to date; “The Fallen: A Roundtable” discussion with writer Bryan Cogman and a few of the many cast members who meet their demise in Season 4; “The Politics of Power: A Look Back at Season 3”; “Bastards of Westeros” in which showrunners David Benioff & D.B. Weiss and author George R.R. Martin discuss the role bastards play in the Seven Kingdoms; as well as deleted/extended scenes and commentaries. The Blu-ray release adds an “In-Episode Guide” that provides background information about on-screen characters, locations and relevant histories and “Histories & Lore,” which shows the mythology of Westeros as told from the varying perspectives of the characters themselves.