Sarcastic spies, pirates and talking sea creatures all team up on store shelves for this week's home entertainment releases on Blu-Ray and DVD. 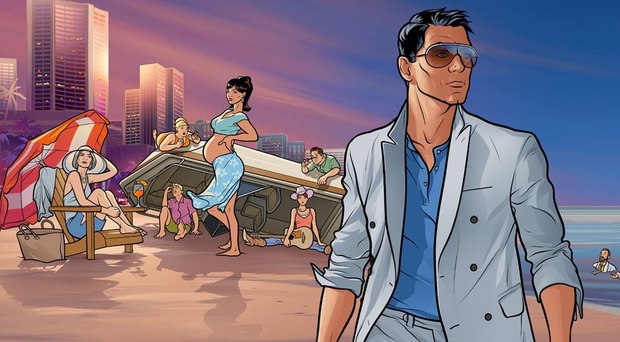 Sarcastic spies, pirates and talking sea creatures all team up on store shelves for this week's home entertainment releases on Blu-Ray and DVD. Check out the new titles below, and let us know which ones are on your wish list. Dubbed “Archer Vice” in a nod to Grand Theft Auto: Vice City, the fifth action-packed season of the hit animated series contains sex, drugs and espionage galore. Join suave super-spy Sterling Archer and his fellow covert government operatives for more irreverent adventures across the globe. With an overabundance of cocaine at their disposal, the team forms a cartel and sets out to sell the drug. As this dubious new venture speeds into hilarious motion, the team deals with addiction, Cheryl's turn as a country singer, an FBI bust, an open marriage, Kenny Loggins, a South American dictator, and an announcement Archer couldn't have imagined in his murkiest, tequila-influenced haze.

Archer -- The Complete Season Five contains all 13 episodes and comes with a cool stash of classified extras. Special bonus features include "Midnight Blues" Music Video by Cherlene Tunt, Cherlene Tunt Interview on Wake Up Country, and Old MacDonald Pam Poovey Had a Farm, The Musical. Set sail for an epic saga stretching from London, all the way to Never Land and back with an all- new feature-length adventure and 10 Jake's Never Land Pirate School shorts. Before you can say, “Pixie dust, away!” -- Wendy, John and Michael Darling join Jake and the Never Land Pirates for a soaring, swashbuckling, full-length adventure. Captain Hook -- fed up with being portrayed as a bumbling fool in Wendy's magical storybook -- flies the Jolly Roger to London and snatches the book away, so Peter Pan calls on Jake and his crew to help save the day. But there's no time to lose, because the longer Hook has the book, the faster everyone's memories of Pan and Never Land will fade away... forever!

Overflowing with action-packed fun, beloved Peter Pan characters and four additional episodes, Battle for the Book is an unforgettable celebration of teamwork and the magical power of storytelling. When an evil scientist threatens the planet, courage and true friendship are put to the test in order to save the rainforest in the thrilling animated adventure Jungle Master. Awarded the Dove Seal of Approval, Jungle Master features an all-star voice cast including Victoria Justice (iCarly), David Spade (Grown Ups), Josh Peck (Drake & Josh), Jon Lovitz (The Benchwarmers), Christopher Lloyd (Back To The Future) and Jane Lynch (Glee).

Bonus materials include a look at the cast's experience in the recording studio with the “Giving The Characters A Voice: At The Recording Studio With Victoria Justice, David Spade, Josh Peck, Jon Lovitz and Jane Lynch” featurette as well as bonus episodes of the award-winning Miniscule. Join the Octonauts for 90 minutes of epic swashbuckling adventures as they set out on a series of piratey adventures! Kwazii comes face to face with his long-lost pirate grandfather Calico Jack, while the Octonauts travel deep down the Amazon River in search of a lost city. Then, Kwazii goes head-to-head with three swashbuckling swordfish, gets shipwrecked on a desert island with Peso, and meets the perfect sidekick while hunting for pirate treasure: a parrotfish! DVD ($99.98) available from FUNimation through Amazon.com.

Exclusive release combines Collections 1 through 4 (episodes 1-103) in one set, with select commentary, textless songs, and trailers. SpongeBob SquarePants: The Pilot, a Mini Movie and The SquareShorts

A collection of classic SpongeBob fun -- in time for the February theatrical release of The SpongeBob Movie: Sponge Out Of Water -- including the original pilot episode from 1999, the mini movie Truth or Square and 42 shorts filled with everyone's favorite Bikini Bottom friends.