Disney’s ‘101 Dalmatians,’ ‘Sailor Moon’ and LEGO super heroes all team up on store shelves for this week's home entertainment releases on Blu-Ray and DVD. 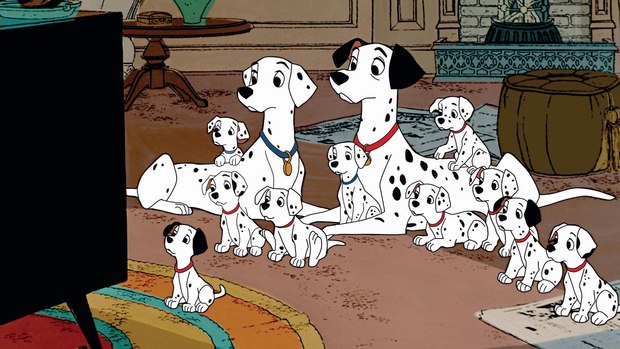 Disney’s 101 Dalmatians, Sailor Moon and LEGO super heroes all team up on store shelves for this week's home entertainment releases on Blu-Ray and DVD. Check out the titles below, and let us know which ones are on your wish list. Disney’s beloved 1961 animated classic 101 Dalmatians has been given the diamond treatment with a Digital HD and Blu-ray release featuring an all-new, never-before-seen animated short.

Pongo, Perdita and their super-adorable puppies are in for thrills, hilarious spills and an epic action-packed adventure when they face off with Cruella De Vil, Disney’s most fabulously outrageous villainess. When Cruella dognaps all of the Dalmatian puppies in London, brave animal heroes launch a daring plan to save all puppies from Cruella’s clutches.

Based on the book “101 Dalmatians” by Dodie Smith, the film adaptation was directed by Wolfgang Reitherman, Hamilton S. Luske and Clyde Geronimi, and produced by Walt Disney himself. The voice cast includes Rod Taylor (Inglorious Bastards, The Birds) as Pongo, J. Pat O’Malley (The Jungle Book, Alice in Wonderland) as Jasper and Betty Lou Gerson (The Fly, Cats Don’t Dance) as the infamous Cruella de Vil.

This special Diamond Edition release includes an all-new short, The Further Adventures of Thunderbolt, along with the 1961 version of “Walt Disney Presents The Best Doggoned Dog in the World,” “Lucky Dogs,” “DisneyView,” and “Dalmatians 101: Hosted by Cameron Boyce” (The Descendants), plus a selection of Classic Bonus Features. This latest home entertainment release contains Episodes 24-46 of the legendary Sailor Moon anime series, along with a variety of bonus material and special premium packaging. Uncut English dubbed as well as Japanese subtitled dialogue options will be available on both formats.

In this latest collection of episodes, Sailor Moon, Sailor Mercury, and Sailor Mars continue their quest for the Legendary Silver Crystal as two new powerful allies join the fight. Meet Sailor Jupiter, the tall and tough Guardian of Thunder, and Sailor Venus, Guardian of Love and most experienced member of the Sailor Guardians. Sailor Moon herself gets an impressive new power and learns more about the mysterious Tuxedo Mask. Could their distant past be intertwined, and does that have anything to do with the Moon Princess they seek? The final ordeal with Queen Beryl looms on the horizon, and it will take everything the Sailor Guardians have to be victorious. In this follow-up to LEGO Batman, The Movie: DC Super Heroes Unite, the Justice League is newly solidified yet faces a peculiar set of villains in LEGO DC Comics Super Heroes: Justice League vs. Bizarro League. The Blu-ray and DVD releases will include an exclusive Batzarro LEGO Minifigure on-pack, while supplies last.

Batman has joined the newly formed Justice League in order to keep tabs on Superman, a mistrust that is complicated by Superman’s clumsy -- but well-meaning -- clone, Bizarro. Bizarro’s creation of the Bizarro League has caused confusion amongst the world’s greatest Super Heroes, but an even greater and mysterious threat may force the Justice League and Bizarro League to band together to defeat evil.

The Blu-ray Combo Pack includes a digital version of the movie on Digital HD with UltraViolet. Special features include the 22-minute LEGO DC Comics Super Heroes: Batman: Be-Leaguered TV special along with Be-Leaguered Bloopers and the Bizarro! featurette. One part oddity, one part comedic curiosity, Bizarro is a favorite among the characters within Superman’s universe. Take a look at the Man of Steel’s potent, backwards nemesis. Now in its fourth season on Disney Junior, Chuggington is a colorful and contemporary CGI-animated TV show from Ludorum that reinforces early social readiness skills. The series has become a global sensation since its debut in September 2008 in the U.K. The show has been licensed to more than 175 territories worldwide and has established ratings records in several key international markets, including the U.K., Germany, France and Australia. The series made its U.S. debut in January 2010.

In Turbo Charged Chugger, the trainees take their responsibilities to a whole new exciting level. Wilson and the Chug Patrollers attempt a daring bridge rescue, Brewster helps the Chuggineers build a new station, Koko tries to smash her Chug-A-Sonic record, the Speed Fleet competes in the Track Dash, and everyone learns how to use the Piggy-Back Wagon. With old friends and new, including Hanzo -- Head of Speed Fleet, Fire Chugger Asher and Tunnel Runner Payce -- riding along, young trainees at home will learn to work together, play fair and use good judgment as they take on new responsibilities of their own.

Episodes include “Special Rescue Team,” “Team Trainee,” “Record Breaker Koko,” “The Old Silver Mine Line,” “A Pat on the Paintwork” and “Top Secret Koko.” DVD bonus features include the Badge Quest Episode, “No Time to Waste,” Character Montages for Asher and Payce, and Coloring and Activity Pages.