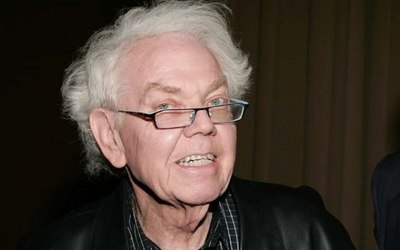 Satirist, comedian and voice actor Stan Freberg, who influenced generations with his witty comedy albums and cartoon voices and memorable advertising campaigns, died Tuesday in Santa Monica. He was 88 and had been suffering from respiratory problems and pneumonia.

His son Donavan posted the news on his Facebook page, saying, “He was, and will always be, my hero, and I will carry his brilliant legacy forward as best I am able.”

Born in Pasadena, CA, Freberg began his six-decade career doing impersonations on Cliffie Stone’s radio program in 1943. Soon after he began voicing characters for the now-classic Warner Bros. cartoons, working with the genre’s king, Mel Blanc. He famously played the three pigs, the wolf and the singing narrator in the 1957 Looney Tunes classic, Three Little Bops, and also voiced Junyer Bear, Beaky Buzzard (“A-nope-nope-nope”) and Tosh, one of the two Goofy Gophers opposite Blanc. But perhaps the actor’s most enduring portrayal was the seemingly slow Pete Puma, who was asked by Bugs Bunny how many lumps of sugar he wanted in his tea. “Oh, three or four,” Pete drawled — before Bugs’ numerous shots to the melon with a mallet produced said lumps.

For Disney, Freberg voiced Beaver in Lady and the Tramp, the title character of Lambert the Sheepish Lion, and the Egyptian God Ra in the Hercules: The Animated Series episode, “Hercules and the Romans,” and the narrator for An All New Adventure of Disney's Sport Goofy, “Down and Out with Donald Duck,” and The Wuzzles. His rendition of the song “Money” appeared in episode 106 of The Muppet Show as performed by Dr. Teeth. The writer-producer crafted some of the funniest TV commercials of the 1960s and ‘70’s, including “Today the pits; tomorrow the wrinkles. Sunsweet marches on!,” and Contadina’s “Who put eight great tomatoes in that little bitty can?”

He also scored such novelty-record hits as “John and Marsha,” “Saint George and the Dragonet” and “Green Christmas.” His 1961 comedy album “Stan Freberg Presents the United States of America” remains a classic of the form and an influence for a generation of comedians.

Freberg produced the Emmy-winning kids puppet show Time for Beany -- Albert Einstein was said to be a fan during his years at CalTech -- and hosted numerous variety series and specials on TV and radio.

His live-action acting included roles in The Monkees, The Girl From U.N.C.L.E., the role of Mr. Parkin on Roseanne and The Weird Al Show. His Stan Freberg Show on radio was controversial for several reasons, including the fact that he refused to accept tobacco companies as sponsors.

Freberg continued working well into his eighties and released an album, Songs in the Key of Freberg, with his wife in 2010.

He is survived by his wife Hunter, son Donavan and daughter Donna Jean.