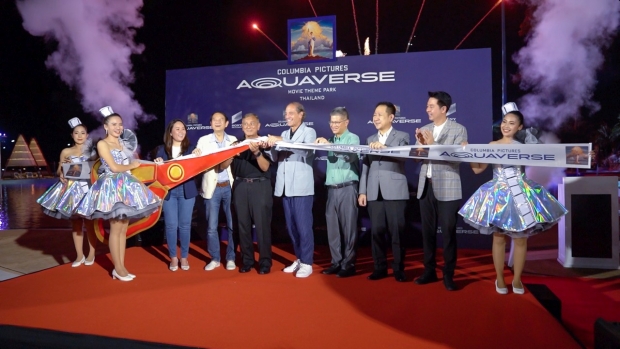 The country’s newest theme park offers thrilling rides and immersive attractions allowing guests of all ages to enjoy their favorite characters from Ghostbusters; Jumanji; Bad Boys; Zombieland; The Emoji Movie; Surfs Up; Hotel Transylvania; and Cloudy with a Chance of Meatballs.

The Hotel Transylvania zone is Southeast Asia’s largest water play structure where guests can choose from nine slides and experience over 100 water features that the whole family can enjoy. Ghostbusters Proton Stream allows visitors to indulge in a scream-filled ride as they twist and turn in total darkness before dropping into the gigantic Stay Puft-themed water dome. Another highlight of the water park is the Mega Wave Pool, which hosts music events, movie screenings, and live shows on the main stage featuring three giant LED screens and a Dolby DTS surround sound system. Mr. Jeffrey Godsick, Executive Vice President Global Partnerships and Head of Location Based Entertainment of Sony Pictures Entertainment, said, “I am both excited and proud of what we have achieved at the park.  This is a major step in our growing footprint of Location Based Entertainment activations around the world.  Today’s opening is just the beginning here in Thailand. The future will bring many new statements in hospitality, retail and experiences based on our beloved IP.  This region is special for reasons beyond the theme park, and we are very pleased to be part of the tremendous growth plans of the Eastern Economic Corridor.”

“It is my honor to co-create this fully immersive experience that marks a phenomenal event for Thai tourism under the strategy of Eastern Economic Corridor’s smart city,” said Mr. Liakat Dhanji, CEO and Chairman of Amazon Falls Co. Ltd., owner and operator of Columbia Pictures Aquaverse. “We hope to create a dreamlike destination that brings people’s favorite characters and movies to life and give audiences the extraordinary journey they are unlikely to find elsewhere. This is just a beginning of a long-term relationship with Sony Pictures Entertainment to bring immersive experiences throughout this destination project,”

The park is strategically located as part of the Eastern Economic Corridor (EEC)’s plans to develop the area into a global destination, including a new airport and the expansion of highway and train systems. Dr. Kanit Sangsubhan, Special Advisor on Strategic Development, EEC, stated that, “After working with Amazon Falls for four years, I’m so proud to see the opening of the Columbia Pictures Aquaverse which is poised to set new standards for immersive entertainment in the EEC, Thailand. The theme park will be a key component in our EEC Smart City’s development plan. EEC will provide our full support, including 5G services and other infrastructure, digital technology, transit links, and partnership with clean energy and investment promotion package to ensure the success of the project and help create a long-term sustainable development in the EEC.”