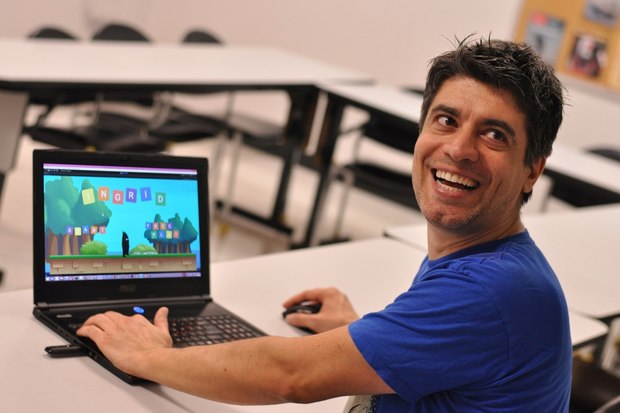 Sunnyvale, CA -- Cogswell College, a 600-student educational institution offering a unique curriculum fusing Digital Art, Engineering and Entrepreneurship, has announced that its current Game Design Engineering student Christian Sasso has just applied for his 16th patent. He is also the Lead Engineer on an original, student-designed math game for children, and is developing his own unique VR game integrating Google Cardboard technology.

A well-established software engineer, Sasso decided to enroll in Cogswell College to begin a new career path in hopes of fulfilling his dream of becoming a video game designer. “I felt the education that Cogswell was offering would certainly be well worth my time and money,” he says. “Sincerely, I was a bit unsure whether, at the age of 40, it was really a good idea for me to go back to school and to acquire the new knowledge necessary to propel a career change. But when I realized that I have been living for eight years so close to an accredited college that actually teaches people how to make video games at a professional level, I took it as a sign that I had to at least give my crazy idea a try!”

“Christian Sasso is truly an exceptional student and team member,” adds Jerome Solomon, Cogswell’s Dean of the College, Director of Game Design & Development, and ACM SIGGRAPH 2017 Conference Chair. “He is also very smart. My goodness -- he has 16 patents! An outstanding member of our Game Design Engineering concentration, we consider Christian a real rock star. I’ve found him to be a quick and sophisticated problem solver with a knack for elegant solutions. His accomplishments at our college have been impressive. He is well respected on campus and is really a great collaborator to work with.”

Currently serving as the Lead Engineer within Cogswell College’s Game Studio 2, Sasso is developing an original videogame called Ingrid. The project has been commissioned to Cogswell by external customer Prairie Rainbow Company, a company which produces physical block-based games that are meant to teach children basic math skills.

The genesis of Sasso’s original VR Game goes back to his participation, along with fellow student Steven Ulrich, in the recent, Cogswell-hosted 2015 Global Game Jam. During that event, the duo designed and implemented a virtual reality game, called We R Ball, for Google Cardboard using Unity and C#. The men created a maze generator with treasures scattered around, which uses a ball controlled by the player's gaze through a Google Cardboard VR headset.

One night during the 2015 Game Jam, Google was giving the cardboards away for free to all participants. The duo decided to develop their mini-game in a way that the only "controller" required would be the VR headset itself. This original VR game is currently under active development by Sasso and Ulrich in hopes of it being shown during SIGGRAPH 2015. Check out a video of the prototype We R Ball, showing its basic mechanics, in the player below: