‘Tangram Jam,’ developed and produced as part of the Cogswell Game Design & Development program, will be presented at the 2014 SIGGRAPH Conference’s “Appy Hour” showcase in Vancouver. 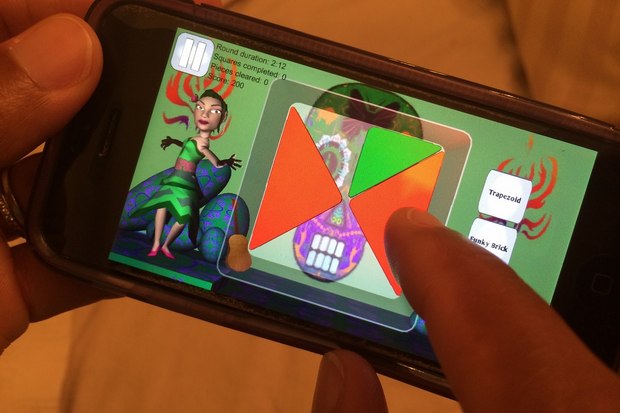 Cara Ricci, one of Cogswell’s Game Design Art students participating in the project-based learning Game Studio, will be presenting the new game, entitled Tangram Jam, at SIGGRAPH. The game was developed and produced as part of a Cogswell Game Design & Development course. SIGGRAPH’s “Appy Hour” is designed to showcase the next generation of mobile applications and their creators. Demos by developers of interactive, animated, location-based, visualization and game apps will be presented at SIGGRAPH’s West Building, Exhibit Hall A, on Wednesday, August 13th, from 5:30 – 7:30 PM.

Tangram Jam is an iOS and Android mobile educational puzzle game created by students attending Cogswell’s Game Studio. The game is aimed at third and fourth grade students, and has been designed to teach them concepts of adding fractions. The game leverages visual, auditory and kinesthetic learning style techniques in a fun and stimulating environment. 3D characters and procedurally generated music are also featured in the game.

"Cara Ricci's contribution to the exciting new kids game Tangram Jam has been invaluable,” said Jerome Solomon, Cogswell’s Dean of the College & Director of Game Design & Development program. “She completely redesigned our user interface and contributed much of the game's UX (user experience).  She also worked as a character animator on our team. The look and feel, UX, and animations featured in this new game are critical to making its game play experience fun and engaging for third and fourth grade students."

“Almost everything on this project was new and different for me, since I had never previously worked on a video game project with a team comprised of more than five people,” Ricci adds. “There was a lot of teaching and learning from each other, since we had to pass off work and take on unfamiliar tasks. It was exciting for me to have learned such a huge amount of information in a very small period of time. Our original idea was to develop a game that would teach fractions to children in a fun and visually pleasing manner. I believe that the kids who ultimately play Tangram Jam will learn math through shape and color association, as well as how fractions are basically pieces of a whole. Hopefully, it will also teach them how to make decisions quickly, and how to organize and categorize within a restricted time limit.”

Tangram Jam was built and designed by students attending Cogswell’s Game Studio -- a project-based learning environment similar to industry game studios. The students came together to collaborate on a team as part of the Game Studio’s courses culled from several programs -- including game engineering, audio production, audio engineering, game art, animation and animation engineering. The game’s title pays tribute to a pre-existing physical puzzle game which uses wooden "tangrams" to create shapes and/or fit into squares, while the word "jam" highlights the musical elements featured in the game.

In addition to Ricci’s involvement on Tangram Jam, Cogswell student Jennifer Hicks created the original UI design, and Sean Sercombe developed the UI implementation into the game and some UX. The project included a real external client on the East Coast, with whom the Cogswell team connected via Skype teleconferencing. The students also used a revision control system, Maya, Unity, C# (C-Sharp,) and python programming to complete the work. From an educational perspective, the game team behind Tangram Jam covered multiple important learning styles -- including visual, auditory and kinesthetic.