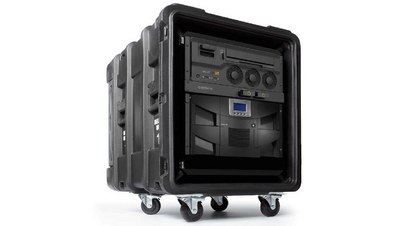 London -- Codex, the industry leader in RAW recording and workflow, has collaborated with ARRI to develop the recording and workflow system for ARRI’s new, ground-breaking ALEXA 65 large format camera. Codex has worked closely with ARRI to create a high-performance, in-built camera recorder plus an on-set and near-set data management system, which combine to deliver streamlined camera-to-post workflow for the ALEXA 65 camera -- The Vault Lab 65.

The ALEXA 65 camera incorporates a Codex recording engine, similar to the system that is built into ARRI’s popular ALEXA XT camera, also developed by Codex. Existing ALEXA XR Capture Drives support recording from ALEXA 65 at up to 24fps, and a 512GB media card will record around ten minutes in full open gate mode. Next-generation Capture Drives developed by Codex will offer 2TB of recording capacity, and be capable of 20Gb/s data rates, enabling recording times of over 45 minutes.

“Like ARRI, Codex believes in delivering excellent image quality and reliable products to the cinematographic community,” said Franz Kraus, managing director of ARRI. “Having already successfully implemented the in-camera capture technology for the ARRI ALEXA XT, and a solid workflow with Vault, Codex was a natural choice as the workflow developer for ALEXA 65.”

“DPs want something different -- to raise the bar for theatrical release and expand the options they have for the look of their project. 65mm is a wonderful format, and with the new ALEXA 65 system it becomes affordable for the very first time,” said Marc Dando, managing director of Codex. “Anyone familiar with ARRI ALEXA and Codex Vault will be comfortable with the Vault Lab 65 workflow. We are delighted to have worked so closely with ARRI again, to set new performance capabilities in digital imaging, and play a part in expanding the creative possibilities for the cinematographic community.”

“I cannot express how enthusiastic I am about the forthcoming ALEXA 65,” said Academy Award winning cinematographer Robert Richardson ASC. “I am currently working with 65 film and if the quality is anywhere near that of film we will all benefit from the increased information and quality of image."