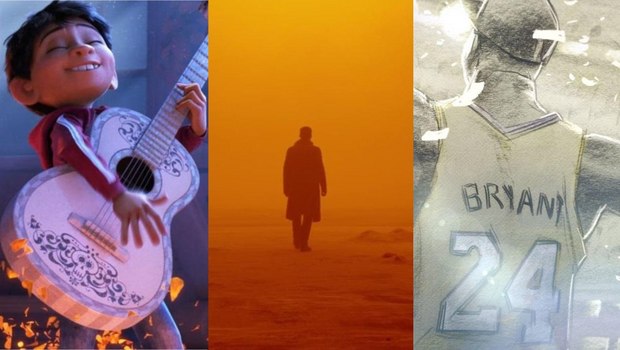 Guillermo del Toro’s The Shape of Water of Water was the big winner at Sunday night’s 90th Academy Awards, taking home the Oscar for Best Picture along with statuettes for Production Design, Original Score and Directing. Kobe Bryant and Glen Keane pose backstage with the Oscar for best animated short film, for work on ‘Dear Basketball’ during the 90th Oscars at the Dolby Theatre in Hollywood, CA. Image credit: Matt Petit / A.M.P.A.S.

“Thank you, thank you, Academy,” Keane said during his acceptance speech. “Thank you Gennie Rim, Max Keane, our entire crew for your incredible talents. My wife Linda for your years of love and support. And to Kobe, for writing Dear Basketball. It’s a message for all of us. Whatever form your dream may take, it’s through passion and perseverance that the impossible is possible.”

“Thank you, Academy, for this amazing honor,” added Bryant, who served as executive producer for the project. “Thank you, John Williams, for such a wonderful piece of music. Thank you, Verizon, for believing in the film. Thank you, Molly Carter, without you we wouldn’t be here. And to my wife Vanessa, our daughters Natalia, Gianna, and Bianka. Ti amo con tutto il mio cuore. You are my inspiration. Thank you so much, guys, thank you.” Lee Unkrich and Darla K. Anderson pose backstage with the Oscar for Best Animated Feature Film for work on ‘Coco’ during the 90th Oscars at the Dolby Theatre in Hollywood, CA. Image credit: Michael Baker / A.M.P.A.S.

“Thank you to the Academy. We are so happy. Coco is proof that art can change and connect the world and this can only be done when we have a place for everyone and anyone who feels like an “other” to be heard,” Anderson said. “This is dedicated with enormous love to my gigantic, interwoven family and most especially, my wife, my rock Kori Rae.”

“Love and thanks to my family, my Latino community, to my husband Ryan,” Molina said. “Each for expanding my sense of what it means to be proud of who you are and where you’re from. We hope the same thing for everyone who connected with this film.”

“We share this with our immensely talented cast and crew as well as the executive teams at Disney and Pixar,” Unkrich said. “Thanks for the support of my wife Laura, my three kids, Hannah, Alice, Max. My entire family, I love you. And the biggest thank you of all to the people of Mexico. “Coco” would not exist without your endlessly beautiful culture and traditions. With “Coco” we tried to take a step forward toward a world where all children can grow up seeing characters in movies that look and talk and live like they do. Marginalized people deserve to feel like they belong. Representation matters.”

Gonzalez, the voice of Coco lead Miguel, gave his thanks in Spanish: “Muchísimas gracias a todos y que viva México!”

Songwriters Kristen Anderson-Lopez and Robert Lopez won the Oscar for Best Original Song for Coco’s “Remember Me,” the second win for the husband-and-wife songwriting team, who previously received an Academy Award in 2014 for “Let it Go” from Disney’s animated hit Frozen. Director Denis Villeneuve’s Blade Runner 2049 received the Oscar for Best Visual Effects, with statuettes handed out to John Nelson, Gerd Nefzer, Paul Lambert and Richard R. Hoover for their contributions to the film.

“I share this with my incredible team led by Michelle back at Double Negative, my family, especially for putting up with the crazy hours of the last 22 years,” Nelson said. “Hopefully my boys Boston and Jackson are watching right now. And to all the people who’ve had such a big influence on me and my career. Thank you.” Jeffrey A. Melvin, Paul Denham Austerberry and Shane Vieau pose backstage with the Oscar for Achievement in production design, for work on ‘The Shape of Water’ during the 90th Oscars at the Dolby Theatre in Hollywood, CA. Image credit: Michael Baker / A.M.P.A.S.

“To all my friends in Montreal, merci beaucoup, this is for you,” Hoover added, while Nefzer gave a shout-out to his native country: “Danke schon, Germany. Thank you. Great.”

“You know, I really love my job,” Deakins said in accepting the award. “I’ve been doing it a long time as you can see. But you know, one of the reasons I really love it is the people I work with, both in front of the camera and behind the camera. Some of my crew on Blade Runner, I’ve been working with for over thirty years, and others I met for the first time in Budapest. And this is for every one of them, every one of them. In fact, I gotta say it’s for us, because it was a team. It was really a team effort. Thank you, thank you, very much.”

The full list of nominees and winners is shown below:

ACTOR IN A SUPPORTING ROLE

ACTRESS IN A SUPPORTING ROLE

ACTOR IN A LEADING ROLE

ACTRESS IN A LEADING ROLE