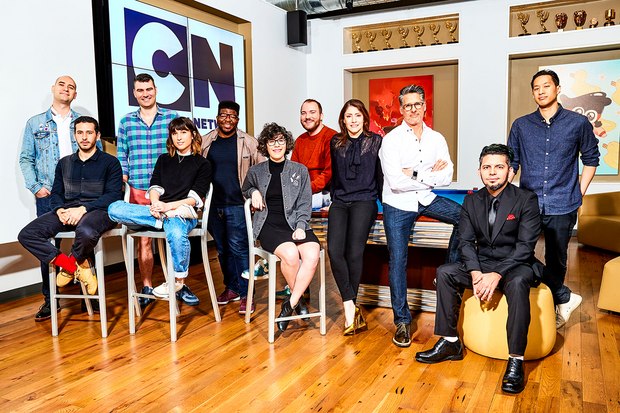 Cartoon Network announced its largest slate of content ever from a new wave of creators telling stories that are relevant and reflective of today’s kids. The network, which is seeing success in total consumption across its platforms, is also adding more than 30 new games and apps to its mobile and web portfolio that has more than 200 million worldwide downloads and now includes a series of podcasts, VR and AR experiences.

Known for its immersive storytelling, Cartoon Network is introducing the next generation of creators with series including: Owen Dennis’ mysterious and magical adventure Infinity Train and Diego Molano’s Latin American supernatural comedy Victor and Valentino.

These new series will be joining the recent premiere of Apple & Onion from George Gendi; the upcoming debut of Craig of The Creek by Matt Burnett and Ben Levin; Julia Pott’s Summer Camp Island bowing this summer; and the recently premiered Unikitty!, the newest series produced by Warner Bros. Animation, and based on the beloved character from The LEGO Movie.

“It has always been in our DNA to embrace kids for who they are and build relatable worlds, stories and characters for them,” said Christina Miller, president of Cartoon Network-Adult Swim-Boomerang. “This moment is especially exciting because this new wave of talent naturally brings depth and interactivity to their storytelling. It is a perfect match for our audience.”

“Cartoon Network continues to see growth in time spent on video and gaming platforms as kids are enjoying our content across a vast array of environments,” said Donna Speciale, president of Turner Ad Sales. “The best way for brands to reach and engage our fans is through a total audience approach that captures all of these relevant spaces.”

New episodes of additional Cartoon Network favorites Mighty Magiswords and Clarence will also roll out through the year.

Cartoon Network will offer fans digital experiences across mobile, web and streaming platforms to engage with the worlds of Adventure Time, Ben 10, OK K.O.! Let’s Be Heroes, Steven Universe, and We Bare Bears, among other properties to be announced.