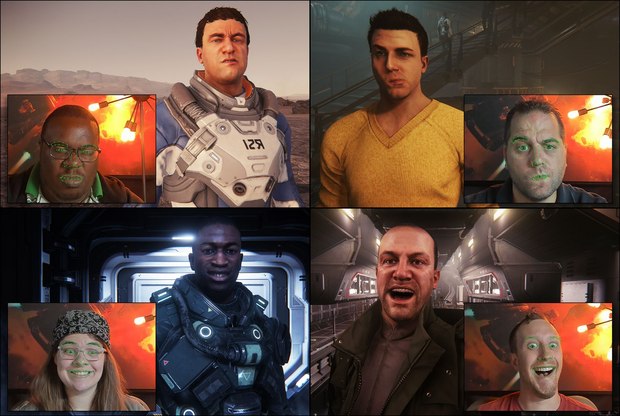 The new feature will track players’ facial expressions and movement, then reproduce them on their avatars in-game, allowing for the most immersive and realistic player-to-player communication. CIG is demoing the new feature at its Gamescom event at Gloria Theater happening August 25 at 9:00pm CEST in Cologne, Germany.

Star Citizen’s Face Over Internet Protocol (FOIP) feature was built with Faceware’s recently announced LiveSDK, which is powered by Image Metrics’ award-winning, real-time technology. Using Faceware’s soon-to-be-released facial motion sensor, this new feature enables Cloud Imperium and any Star Citizen to detect hundreds of facial movements in a variety of lighting conditions. Those movements are then instantly streamed onto the character’s face, in-game, a critical element in creating believable digital faces. The feature can also be used with the computer’s built-in webcam, though the quality of facial detection may vary.

“This is the first time any game has used this kind of technology to detect and stream the facial movements of players in real-time, and I believe it’s a revolutionary step in gaming,” said Chris Roberts, chairman and CEO of Cloud Imperium Games. “For the first time we’ll be able to deliver the full range of human emotion, not just voice. Our players’ facial expressions will be translated onto their avatars’ face. Combine that with a player’s voice correctly positioned in the virtual world, and you have the most lifelike player-to-player communication ever.”

Faceware’s technology has been used for over a decade to produce thousands of digital faces in some of the world’s most popular video games and films. Over the past two years, the company has been working hard to perfect its real-time technology. Star Citizen is the very first game to use this production-quality facial technology as middleware running in-engine.

“We’re seeing more and more interest in this sort of real-time animation, but Cloud Imperium is the first game company to take it to this level,” said Peter Busch, vice president of business development at Faceware Technologies. “I can’t wait to see the reaction of Star Citizen fans as they chat, in-game, about their next mission, their ships, or what they had for breakfast. Player-driven characters could change multiplayer games forever.”