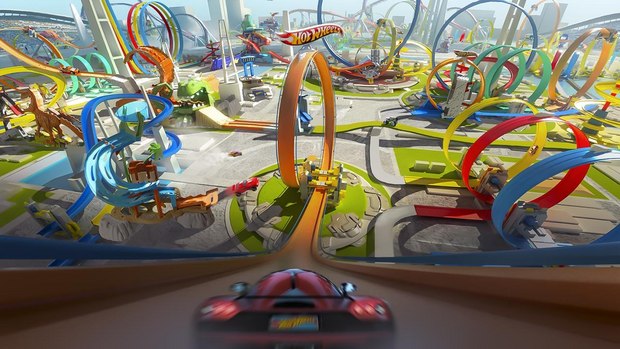 For kids, part of the fun of playing with Mattel’s Hot Wheels is the ability to create insane racetrack designs that are limited only by their imagination -- intense loops, straightaways and hairpin turns are all literally in their hands. Dubai and New York-based visual effects and CG animation studio Clockwork VFX tapped into that cool factor in a new, high-intensity animation sequence that sets the tone for a new campaign for the classic toy brand, created in-house by Mattel and directed by Emmy-winner James Wahlberg of Los Angeles-based production company The Calvary.

“While this is our first project for Mattel, our experience working with numerous toy brands, coupled with our car work, made us a great fit for Hot Wheels,” says Clockwork VFX’s creative director Jason Tomlins. “We understood the kind of energy they wanted to inject into the CG intro. The creative team at Mattel had clear ideas on the look and feel of the Hot Wheels world, but to their credit allowed us to contribute creatively and come up with our own vision for this.”

That vision centers primarily on a CG intro and four animated transitions that open each of the four spots in the new campaign: “Monster Jam,” “Splash Lab,” “Spiral Stack” and “Super Speed Blastway.” Although each spot features a different Hot Wheels play-set, they all begin with a shot of a 3D animated Hot Wheels logo hovering over a richly-detailed Hot Wheels world -- an elaborate cityscape filled with never-ending tracks -- followed by an intense race in which pieces of track fall from the sky connecting only seconds before the cars arrive.

Tomlins notes that the track connection creativity is a huge part of why kids love Hot Wheels, and Mattel wanted to feature it in a singular way in the spots. “There were some challenges in creating the look,” he says. “There are few straight lines and we had to do some experimenting to create an organic track model that could be used for the over-the-top looping action. Secondly, we were challenged with the timeframe. We had to squeeze a lot of action into just a few seconds, in a way that it is meaningful to viewers and communicates the brand message. It’s a delicate dance, but one I think we pulled off with this campaign.”