Post-apocalyptic mega-race Monster 500 is on, and animation/visual effects studio Clockwork VFX is the creative winner. The studio -- led by Creative Director/Co-Founder Jason Tomlins and Executive Producer Nina Davenport -- teamed with agency Rotter Creative Group, New York, and Toys"R"Us to launch the new Monster 500 brand. The result is an engaging minute-long spot consisting entirely of beautifully detailed 3D animation that introduces kids to six of the ten vehicle characters in the Monster 500 family.

While used to working under tight-deadlines, this assignment was different for Clockwork. With 13 team members working for five weeks to complete the complex animation sequences, Clockwork’s creative skills -- particularly their lighting, texturing and rendering capabilities -- were tested. Despite the creative and technical process on display, Tomlins says the key to success was “torturously strict production management.” “There’s a reason you rarely see 60-second CG ads -- they’re difficult to get done on a typical commercial production schedule,” Tomlins notes. “The agency and Toys “R” Us wanted to make the aggressive timeline work, and for us that meant adhering to a detailed production schedule and handling fast turnarounds on revisions. The agency and the brand showed a lot of trust in us to get this done and that trust was rewarded with a cool spot that introduces this new brand in a fun way that resonates with kids.”

The spot opens to the sound of typically creepy pipe organ music and a Dracula-styled voice over that introduces the Monster 500 race and the contestants. As the race begins we meet such characters as Zoom Zombie, Flattop Frank, CrocPot and Captain Heinous as they swerve, jump and crash their vehicles at breakneck speeds through a creepy, moon-lit post-apocalyptic forest. The action is comically highlighted by several dramatic, ESPN-like slo-mo sequences. 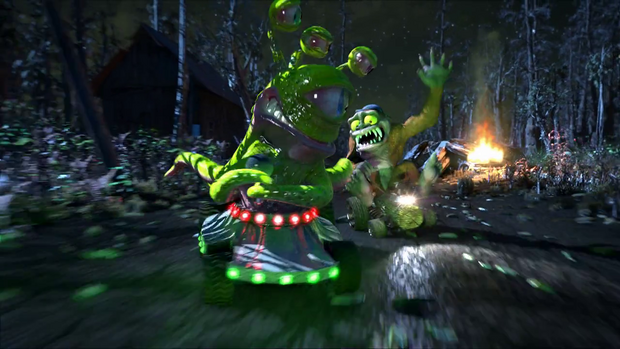 “The spot is action packed, so the story-telling challenge for us was finding the balance between creating the high intensity race sequence, while also allowing each of the characters the time to be introduced to and recognized by the viewer.”