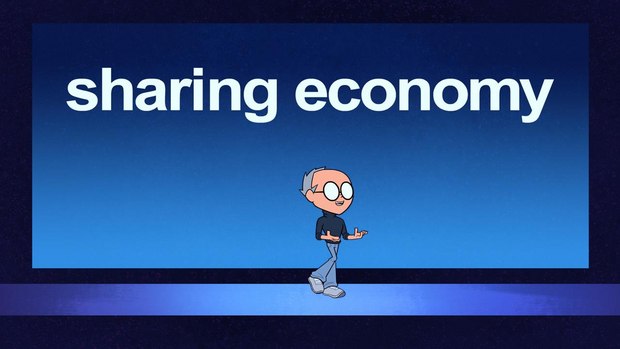 In “Lication,” airing Friday, September 1 6:00/5:00c on Cartoon Network, Robin introduces the other Titans to a moneymaking application, but they soon learn the dangers or a “shareconomy.”

In “Labor Day,” airing Monday, September 4 6:00/5:00c, Robin teaches the other Titans about the importance of labor in a special episode.

Check out the Boy Wonder as Steve Jobs and more in the clips and images below: Teen Titans Go! is a reimagining of the beloved Teen Titans series based on the characters from DC Comics. The half-hour animated comedy series is produced by Warner Bros. Animation with Sam Register (MAD, Teen Titans, Batman: The Brave and The Bold) serving as executive producer with Michael Jelenic (ThunderCats) and Aaron Horvath (MAD) as producers.

The series was recently nominated for an Emmy Award for Outstanding Short Form Animated Program for the episode “Orangins.” The 69th Emmy Awards will telecast live from the Microsoft Theater in Los Angeles, Sunday, September 17 on CBS.