Celsys’ graphics program for comics, illustration and animation hits its highest user base ever in July. 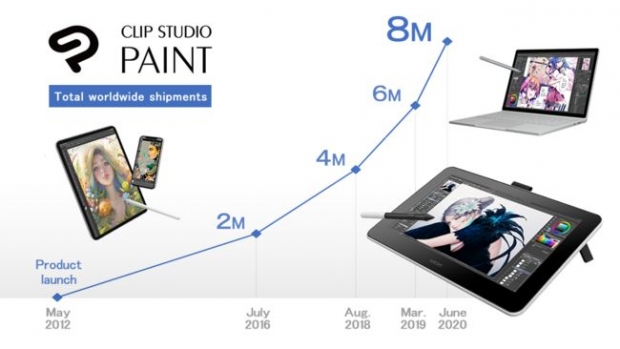 Celsys has announced that Clip Studio Paint, their graphics software program for color and monochrome comics, illustration and animation, has exceeded 8 million total worldwide shipments as of July 2020. Released in 2012, Clip Studio Paint is packed with features, including realistic pen and brush tools for a variety of styles. Artists of all levels use the program, from digital art beginners to professional / comic artists, illustrators, animators, and designers, as well as universities and vocational schools.

As the number of digital artists around the world continues to grow alongside increasing use of drawing tablets and iPads for all forms of digital illustration work, creative tools optimized to support and capture an artist’s “touch” are tremendously important. Transferring an artist’s brush stroke or line work is paramount to capturing the very heart of their creativity – the benefits of working digitally are lost if the tools don’t allow an artist to work exactly as they would on paper or canvass. Clip Studio Paint was specifically designed for artists who enjoy creating hand-drawn illustrations within their graphic design, manga/comics, animation or other digital art projects.

The company release an iPhone version in 2019 in addition to the desktop and iPad versions. The software is available in seven languages (Japanese, English, Traditional Chinese, Korean, French, Spanish, and German), with more than 60% of the user based outside Japan.