CLIP: Going to the Chapel with Signe Baumane’s ‘My Love Affair With Marriage’

New clip from Brooklyn-based independent animator’s follow-up to ‘Rocks in My Pockets’ features the Mythology Sirens, shape-shifting creatures who lure young women into fantasies of everlasting love and blissful marriage. 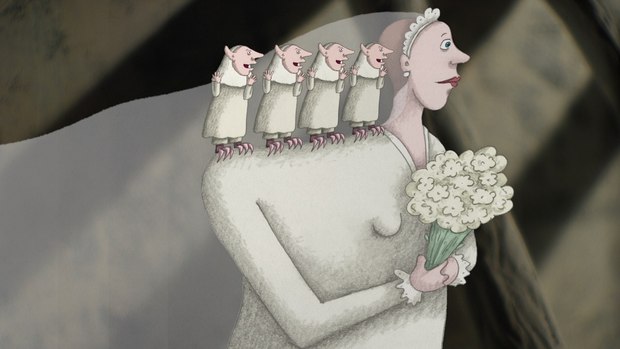 Brooklyn-based independent animator Signe Baumane has unveiled a new clip from her forthcoming second feature, My Love Affair with Marriage.

This sneak peek features the film’s Mythology Sirens, the shape-shifting creatures who lure young women into fantasies of everlasting love and blissful marriage, singing the classic hit, “Going to the Chapel,” written by Jeff Barry, Ellie Greenwich and Phil Spector, and made famous by The Dixie Cups in 1964:

While the song may seem to be a perfect match for My Love Affair with Marriage, composer and songwriter Kristian Sensini is collaborating with Baumane on the film, writing 23 original songs and musical interludes for the project.

After undergoing a two-year development process, My Love Affair with Marriage has embarked on the next phase of its journey with the launch of a crowdfunding campaign at KickstartMarriageFilm.com to help pay for writing and recording the music for the film, as well as to record the dialogue of 30 voice actors. (Stranger Things star Matthew Modine was recently announced as part of the cast, and there will be more news about casting soon.)

My Love Affair With Marriage infuses music and neuroscience into a personal story of love, gender, and marriage. The film follows Zelma, a fiery young woman with a wild imagination as she journeys through many marriages (some real, some imaginary) while confronting societal pressures and her own biology. The film is a very personal love story; an animated feature film for adults. Matthew Modine, who is also executive producing the film alongside producing partner Adam Rackoff for their company Cinco Dedos Peliculas, will voice “Bo,” Zelma’s second husband, who has a shocking secret that eventually destroys their marriage.

With 16 days to go, Baumane’s Kickstarter campaign has already raised nearly $30,809 from 368 backers. Supporters of the project can receive a variety of exclusive rewards, including original animation drawings from the film. The campaign ends on February 24.

My Love Affair With Marriage is written and directed by Signe Baumane, produced by Sturgis Warner, and Executive Produced by Matthew Modine and Adam Rackoff for Cinco Dedos Peliculas.